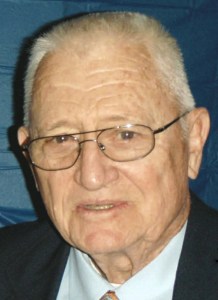 A 1949 graduate of Gatesville High School, he earned his Bachelor’s in Animal Science from North Carolina State University in 1953, later received his Master’s in Education from East Carolina University, and had additional study in School Administration at the University of North Carolina at Chapel Hill where he was recognized with Advanced Certification as a Public School Superintendent. His entire career in education was spent in Gates County, first teaching Math and Science at Gatesville High School and later, when the doors opened on the new Gates County High School, he taught Biology, Physics and Chemistry. In 1967 he was named the Principal at the High School and served for 10 years, at which time he became the county’s public school superintendent until he retired in 1989. In addition to teaching, he coached both baseball and basketball, and assisted in coaching football.

Upon graduating from NC State, Mr. Perry was commissioned a 2nd Lieutenant in the US Army at Fort Benning, Georgia. Deployed to Korea as the war was reaching its end, he taught English in the Demilitarized Zone to South Koreans for 16 months. When he returned to the States, he joined the North Carolina National Guard, rising through the ranks until he retired as a Lieutenant Colonel after serving for 26 years.

A life member of both the National and North Carolina National Guard Associations, he served his community as a member of the Gates County Lions Club. Educational memberships and support groups included the North Carolina Association of Educators, the Wolfpack Club at NCSU, and the Gates County High School Athletic Boosters Club. With his family and friends he shared his lifelong love for the outdoors and was a member of the Nixon’s Ditch Fish Club and the Gatesville Hunt Club. And he served his Lord through his faithful membership in the Gatesville United Methodist Church, holding many leadership positions through the years.

Graveside services will be held Sunday, January 9th at 2:00 p.m. in the Gatesville Cemetery and will be conducted by the Gatesville UMC pastor, The Reverend Elizabeth Villegas, and by longtime family friend, Bishop Hope Morgan Ward. Due to the resurgence of the Covid virus in the area, no formal visitation is planned; however, friends are invited to speak with the family at the graveside immediately following the service.

Memorial contributions may be made to The Gates County Educational Association for Excellence, in care of Jeremy Wright, P.O. Box 125, (on the memo line please write, J.E.R. Perry) where a scholarship in Mr. Perry’s name will be established; or to the Gatesville United Methodist Church, in care of Barbara Wiant, Treasurer, P.O. Box 134, both in Gatesville, NC 27938.