JERSEY CITY, NJ – A high school gym here will bear the name of a Winton native who exceled as a prep and collegiate athlete and later made her mark as a well-respected coach.

The Jersey City Board of Education has voted to name the gym at McNair Academic High School in honor of its long-time volleyball coach Sharon Felton. It is believed to be the first time a Jersey City public school sports facility is being named for woman. 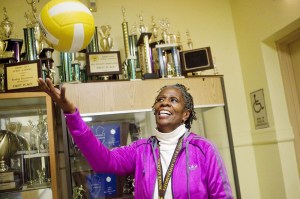 McNair volleyball coach Sharon Felton is seen on June 6, 2013 at McNair Academic High School during the final days of her 38-year teaching and coaching career. Photo by Alyssa Ki / The Jersey Journal

She is the daughter of the late Reverend James A. Felton and Annie V. Felton, who made their home in Winton.

When the policy of “freedom-of-choice” was implemented in North Carolina, one of the provisions allowed children to attend the school they wanted.

“During the 1960’s, my parents chose for me and my siblings to attend the integrated European-American school in Ahoskie,” Felton recalled. “My father was one of the prominent Civil Rights leaders in our area. He and others fought for equal education for African-Americans.”

Felton joined the basketball team at Ahoskie High where she played from 1966-1970.

“Coach Tommie Mitchell was an excellent coach [at Ahoskie High School],” Felton said. “He treated me fairly. He showed no bias because of one’s color or race. It was a pleasure having him for a coach and mentor.”

Felton took her growing athletic talent to St. Augustine’s University in Raleigh where she played basketball for four years and graduated in 1974.

“Under the tutelage of coaches Dean Twitty and Dean Forte, we were undefeated my last year, won the conference championship and I was named the Most Valuable Player,” Felton recalled.

Following college, Felton moved to Jersey City to seek employment and where her aunt and uncle were educators.

“More job opportunities existed for African-Americans in the North,” she noted.

According to an article written by Jake Maher of The Jersey Journal, Felton became a living legend at the school, known for her success as volleyball coach and her larger-than-life personality.

In her interview with Maher, Felton said she is “honored and appreciative” for the recognition. She acknowledged the board, her former students, and especially her parents.

“My parents were educators and emphasized the importance of gaining knowledge, being honest, respectful and giving to others….that is a part of my DNA,” she said.

“(Felton) is someone who’s considered somewhat of an icon in the McNair community,” said Jersey City School Board President Mussab Ali, who was taught by Felton when he was a student there. “Her legend spans generations of students who have had her.”

Felton began coaching volleyball “around 1987,” she said, and posted an impressive record, winning seven city championships and the 2011 league championships with the girls’ team and the 2009 divisional title for the boys’ team. Winning those volleyball championships were the favorite memories of her 37 years at McNair, she said.

She developed a reputation for a fearsome courtside presence, captured by her nickname: “The Feltonator.”

“She stalked the sidelines with passion and fire, chewing out referees and players alike when she felt they did wrong,” Jalia Carter said in a letter to the school board recommending the gym’s renaming.

Carter played for Felton at McNair and she’s now the school’s volleyball coach.

But Felton wasn’t just tough for the sake of being tough. She demanded the best from her players because she knew they were capable of it and she wanted to see them succeed, Carter wrote.

“Yes, I was tough at times because of the principles and values I inherited from my parents,” Felton stressed. “Both were educators and my father served in the United States Marine Corps. In fact, he was a Montfort Point Marine and drill instructor. My philosophy aligns with the qualities my parents instilled in our family, that we should use our gifts and talents for the greater good of all.”

Felton was known as much for her community leadership at McNair as for her athletic leadership. She often organized events for good causes, like charity carwashes for the team to take part in and breast cancer awareness walks. She’s carried this commitment forward since retiring from McNair. No she participates in the Union Street Block Association, voter registration drives, women’s history events and cancer walks.

In 2014 she founded the Mandela Garden where she grows kale, collards, eggplants, tomatoes, and cucumbers, among other things, and shares the produce with her community.

“It wasn’t just about volleyball,” Carter wrote. “Ms. Felton was and continues to be about people.”