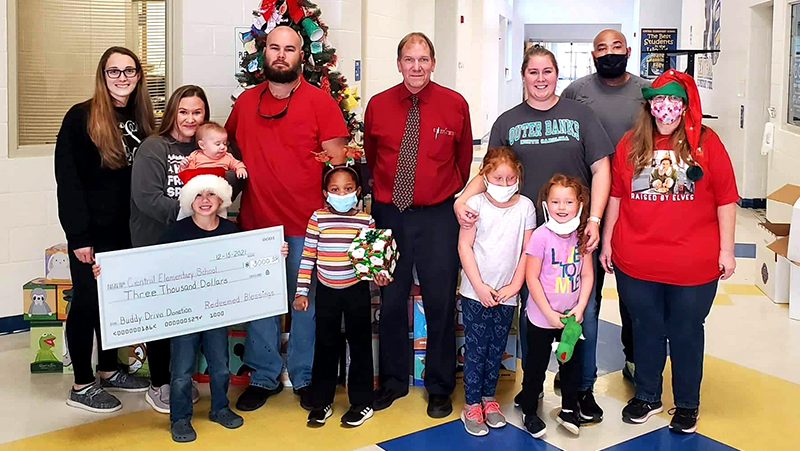 Katie Lassiter (second from left), along with her husband James and volunteers Holli Sparrow and Robin Little, dropped off a monetary donation and almost 200 Scentsy Buddies to Central Elementary School on Dec. 15. Here they are joined by school staff and Principal Daniel McCaw (center, with red shirt and tie) who accepted the items. Contributed Photo

JACKSON – Thanks to local efforts, a recent “buddy drive” benefited both teachers and students at Central Elementary School in Jackson.

Participants were able to purchase and donate a Scentsy Buddy that was then distributed to students, and the commissions the salespeople made from the purchase were also donated to the school to help the teachers afford more school supplies and other necessities.

Katie Lassiter, a Scentsy consultant from Rich Square, has been organizing the event for the past five years, but this time decided to provide some support a little closer to home.

“Scentsy is a fragrance company, and a Scentsy Buddy is like a stuffed animal,” she explained.

The stuffed animals come with a pouch in the back where different fragrances can be inserted. Lassiter said that through efforts from her “Redeemed Blessings” group, they were able to deliver a total of almost 200 buddies to the school on Dec. 15 along with a check for $3,000.

“It turned out very well in a very short amount of time,” Lassiter said, noting that they usually have a few months for the buddy drive, but only had three weeks for it this year since they needed approval first to donate to the school.

“It was a group effort,” she added, gratefully acknowledging all of the people who contributed.

In the past, Lassiter’s group has donated Scentsy buddies to the children’s hospital in Greenville, but last year she said they had built up enough donations there over the past few years that they still had some leftover.

“So this year, I really wanted to do something closer to home in our community, and I know these teachers have been struggling with COVID and the lack of fundraisers the last two years,” she explained.

Lassiter, her family, and other volunteers dropped off the donations at Central Elementary on Dec. 15. Even her five-year-old son Aiden helped out with bringing in and stacking up the buddy boxes. Students had already left for the day when they made the drop off, but she said it was nice to see the positive reaction of the teachers when they arrived.

“It’s a really great feeling,” she said of the event’s success.

Some of Lassiter’s customers have children that attend Central Elementary and they were especially excited to see the results of the fundraising drive.

“You never know what someone is going through,” Lassiter continued, speaking about the importance of helping out in the community.

Lassiter said people can contact her at 252-676-1986 if interested in learning more and participating in future fundraisers.