Robinson’s triple-double was the first in program history (NCAA Division II era) with 17 points, 12 rebounds, and a school-record 11 blocks to go with four assists and four steals.

As a team, Chowan recorded 17 total blocks, a program best. 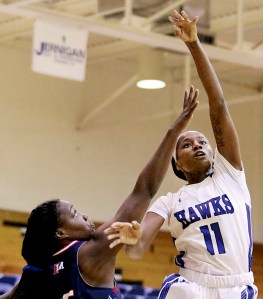 Robinson’s pair of free throws and a three-pointer from Sharpe sparked a 5-0 run to close the third quarter with Chowan back on top, 56-52.

The run continued for the Hawks in the early stage of the fourth quarter where Gaither knocked down a triple along with a jumper by Sharpe and a pair from the stripe by Jones to lead 63-52.

After a pair of free throws by the visitors, Robinson added a pair of her own and Patterson buried a jumper. The Tornado collected four straight points before Patterson pushed the lead back to double-figures with a layup in transition sparking a Hawk run.

The Hawks finished off the contest on a 13-4 run to put the contest out of reach. Demetria Bland posted a transition bucket before Robinson tallied a jumper. Bland and Jones added a bucket as Sharpe posted a pair from the stripe. Kashara Simpson ended the contest with a jumper.

With Robinson, Gaither, and Sharpe leading the way, Chowan built a 22-14 lead by the end of the first quarter.

A pair of long-range bombs from Gaither, a bucket by Bland and an old-fashioned three-point play from Jones aided Chowan in building a 35-26 lead in the second quarter. Most of that lead remained at halftime where the Hawks entered the break holding a 41-33 advantage.

King came out of the locker room on a 7-0 run to cut the deficit to one, 41-40. Jones tallied a jumper as both teams traded buckets. Gaither knocked down a pair to keep the Hawks in front, 47-44.

Patterson scored on a jumper before King went on a 6-0 run to take their first lead of the contest, 50-49. Patterson handed the lead back to the Hawks with a jumper before a pair of free throws allowed King to lead 52-51 with 1:40 remaining in the quarter.

Chowan, who improved to 5-4 overall and 5-2 in league play, will take their momentum into 2022 as the Hawks return to the floor on Jan. 4 at UNC Pembroke in Conference Carolinas action.