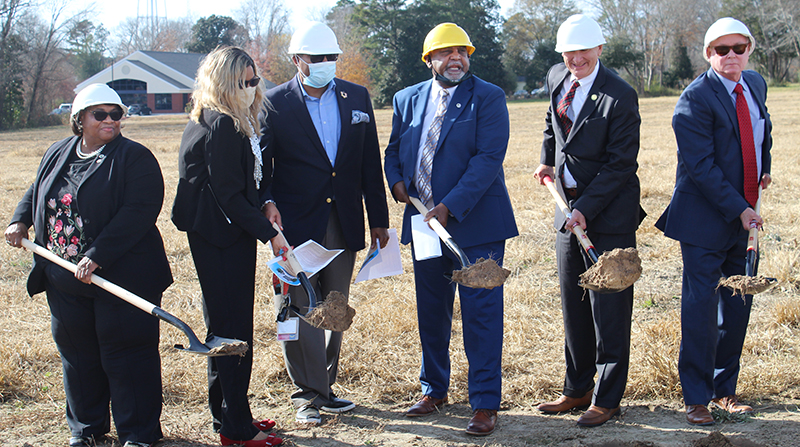 JACKSON – The ground is usually cold and hard in mid-December, but Northampton County officials and judicial representatives had no trouble getting their shovels in the dirt during a groundbreaking ceremony here on Dec. 17.

The event, which took place on a day with unseasonably warm temperatures, was to mark the beginning of construction on a new courthouse for Northampton County.

Invited guests gathered on the 10-acre parcel of land located just east of the State Employees Credit Union in Jackson. Earlier this month, the Northampton County Board of Commissioners approved the $621,050 purchase of that land. That money will be reimbursed to the county through a $14 million grant included in the state budget to cover the full cost for the project. 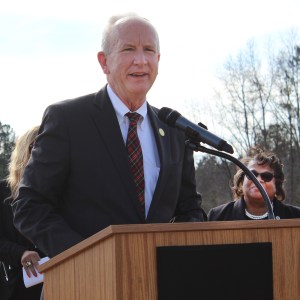 “We are honored and delighted to welcome you on this momentous occasion for a truly historic event in our community’s history,” said Commissioner Joyce Buffaloe in her opening remarks for the event.

Board Chair and Interim County Manager Charles Tyner expressed his excitement to see the project moving forward, recounting the various meetings he and others have taken part in to address the needs of courthouse staff and negotiate for the state funding.

Michael Wray of Gaston, who represents District 27 in the North Carolina House of Representatives, also spoke about the process of obtaining the grant money. He thanked NC House Speaker Tim Moore and Speaker Pro Tem Phil Berger for working together with him during the budget process.

But even with a new courthouse in the works, Wray emphasized that the current courthouse, which is registered as a historic landmark, will continue to be preserved.

“When this [new] courthouse is built, that [old] courthouse will still stand,” he explained. “It will be preserved because of the history. We cannot forget where we’ve come from, where we’re at, and where we’re going.”

Judge Grant and Judge Branch have both spoken at prior county commissioner meetings about health and safety concerns at the current courthouse, a topic which they both touched on again at Friday’s event.

“Safety was at stake. Healthcare was at stake for the people who operate that courthouse,” Judge Branch explained. “They deserve to have a safe and clean atmosphere and office to go to each day. We were concerned about the safety of everyone.

“I want to thank Judge [Al] Kwasikpui,” she continued, referring to the former district judge who attempted to lead the charge for a new courthouse over a decade ago. “He left stacks and stacks of notes, files, letters, pictures, showing the safety issues with this [current] courthouse. Years ago, before I got here.”

Judge Grant admitted he was a bit skeptical at first that the project would actually come to fruition, but he thanked everyone who made it a reality.

“We’re going to try to make you proud of us as judges in administering justice properly here in Northampton County,” he said.

Chief Justice Newby, who recently visited several local courthouses as a part of his statewide tour, spoke about the importance of serving justice without favor, without denial, and without delay.

“The courts shall be open… bats or no bats,” said Newby, making a lighthearted reference to one of the many problems in the past at the current courthouse. But he also added more seriously, “Everyone who comes to the courthouse will be treated with dignity and respect and honor.”

Clerk of Court Laquitta Green Cooper recalled talk of wanting to construct a new courthouse back when she was still a deputy clerk in the county. She said that when Commissioner Tyner took office, he stated a new courthouse would be one of their goals.

“I said to Mr. Tyner, I would love to have a new courthouse, but not on the backs of the citizens of Northampton County. We cannot afford another tax increase,” Green Cooper explained, and then expressed her gratitude for the state grant, which made a tax increase unnecessary.

Green Cooper also stated the current courthouse was unsafe, and pointed out that it’s not just criminals who have to visit the courthouse. People come to handle a loved one’s estate, take care of adoption paperwork, serve on a jury, and more.

Just before the ceremonial groundbreaking, Tim Oakley of Oakley Collier Architects shared details of the plans for the new building.

“The courthouse, when completed, will be a two-story 27,182 square foot facility,” he explained.

The building will contain secure entrances and a secure elevator along with different offices, a multipurpose room, two courtrooms able to seat 160 people each, and more. Construction is scheduled to begin in spring 2022 and is estimated to take 18 months to complete.

State Senator Ernestine Bazemore of Bertie County wasn’t able to attend the event, but Portia Bright Pittman from her office provided a statement to the News Herald on her behalf, saying, “She is looking forward to new beginnings in Northampton County. She is very thankful and very joyful as to what is going to take place in the future in Northampton County.”