A $52 million highway improvement project is slated for Highway 305 in Northampton County, according to the North Carolina Department of Transportation.

The project will upgrade roadway, improve safety and traffic flow, and improve 24 miles of the road. 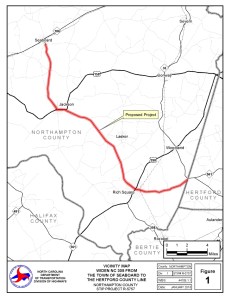 According to detailed information on the project’s site the improvements will stretch from the Seaboard town limits to the Hertford County line (near Tri-County Airport).

The project will not add additional thru lanes but will provide consistent 11-foot travel lanes on the existing two-lane road, along with wider shoulders.

NCDOT said the purpose of the project is to upgrade the roadway, with the improvements aiding in the safety and operation of traffic along the highway.

The project includes improvements to several intersections, minor curve realignments, adding a center turn lane in the vicinity of Central Elementary School near Jackson, adding guardrails in some locations, and the replacement of all culverts, some cross pipes, and two bridges.

Curb and gutter and sidewalk replacement is proposed in the town of Rich Square east of Short Street and at the northeast corner of the North Main Street intersection.

Two bridges over the Urahaw Swamp, located approximately two miles northwest of Rich Square, will be replaced in their existing locations. During construction of the new bridges, traffic will be maintained along the highway using one lane for two-way traffic, with traffic controlled by a temporary signal.

The planning phase for this project began in 2017, and a public meeting was held in March 2018 to present information about the proposed improvements to the community. Comments provided by the public, local leaders, and resource agencies were used to refine the designs to minimize impacts. In 2019, planning for the project was temporarily put on hold due to budget constraints, however, work resumed early this year.

According to NCDOT’s timeline, environmental documents for the project are expected to be signed in March 2022 followed by right-of-way acquisition in July.