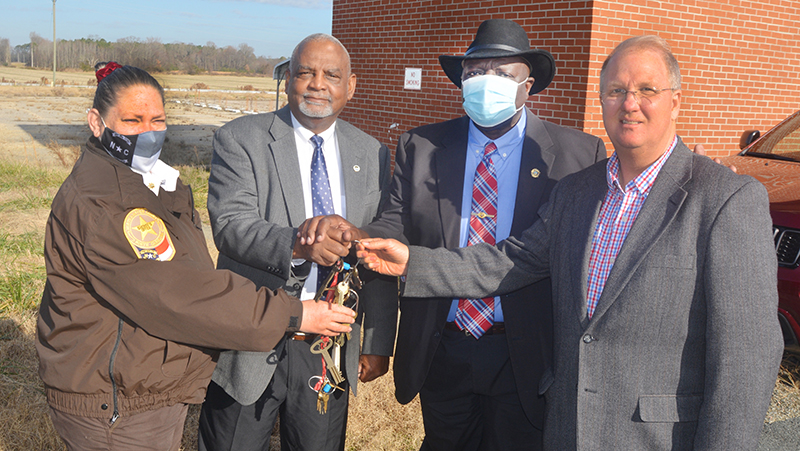 JACKSON – The keys to the former Odom Correctional Institution were handed over Wednesday morning to Northampton County Sheriff Jack Smith.

The recently passed state budget paved the way for the prison to be conveyed to Northampton County. The facility outside Jackson has been closed since 2019.

Sheriff Smith and Northampton Jail Administrator Anna Gee met with county board of commissioners Chairman Charles Tyner and state Representative Michael Wray outside the former prison to receive the keys.

“Once we get started we want to house federal inmates and misdemeanor inmates who have been sentenced,” Smith said.

Smith said the sheriff’s office would continue to house inmates for other counties such as Halifax, which operates under a cap.

The sheriff said the potential revenue for housing inmates at the former state prison is around $2 million a year.

Another idea Smith has and the final part of the plan is to use the facility to house juvenile offenders.

“The last process is juveniles. Staff will have to be retrained for handling juveniles,” Smith noted.

There is also the potential to lease the farm on the grounds of the sprawling 64-acre facility as well as chicken houses located there.

First, however, the facility will have to be inspected and Smith said there will be a team assembled to pore over equipment and structures to make sure they are in working order.

“We’re going to do an inspection so we can plan on how to open,” Tyner said.

Tyner said since the facility has active water and sewer there is also the possibility of expanding infrastructure in that part of the county.

If all goes well with inspections, Smith said he believes the county could begin housing inmates by summer. Housing male inmates at the Odom location would mean female inmates would be housed at the current Northampton jail located at the sheriff’s office in downtown Jackson.

Tyner said using the prison as a jail means employment for people and bringing in extra revenue for the county.

“It will certainly be well used,” Wray said. “We didn’t want to see the building go down.”

With the possible economic benefits from using the facility, Tyner said, “We want to be able to look at what we’ve done and say it was for Northampton County.”

As previously reported by the Roanoke-Chowan News Herald, the North Carolina Department of Public Safety (NCDPS) chose to “temporarily” shut down the Odom facility—along with Hoke Correctional Institution in Raeford and Tyrrell Prison Work Farm in Columbia—in 2019 to provide more workers to other understaffed prisons.

In March of this year, the Northampton Board of Commissioners adopted a resolution supporting a plan to have NCDPS convey Odom Prison to the county for no monetary consideration.

The resolution stated that “Northampton County’s present jail facility located in Jackson is outdated and in need of replacement.”

Using the Odom facility as a replacement jail would provide the county with “an immediate and lasting upgrade to its correctional and law enforcement capabilities without the corresponding financial burden associated with constructing a new facility.”

The prison, located outside of Jackson off Bryantown Road, was built on land the state purchased from the Odom family in 1958. The 300-bed prison opened in 1961. Later renovations expanded the facility’s capacity to 352 offenders.