The show must go on!

AHOSKIE – The kindergarten and first grade classes of Ridgecroft School joined together to perform their annual Thanksgiving play on Thursday, December 16. 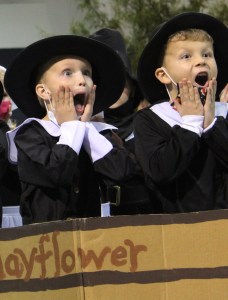 Portraying pilgrams on the Mayflower, these two students at Ridgecroft School react to seeing America for the first time. They were part of Thursday’s play at the school. Staff Photo by Holly Taylor

The short program tells the story of the pilgrims who sailed to America on the Mayflower and met with the Native Americans who taught them how to survive in the new world. At the end, they become friends and share a Thanksgiving meal together.

The event is a longstanding tradition for each kindergarten class, but the pandemic canceled the 2020 performance. With students back for in-person classes this year, the first graders had a chance to participate in what they missed last year alongside current kindergarteners.

Despite having to postpone this year’s play until mid-December, the show went on without a hitch.

With the expanded number of students, the performance was held in the school gym for the first time as proud parents and grandparents watched.

Following the conclusion of the play, the students and their families were treated to a Thanksgiving feast of their own.