JACKSON – The Northampton County Board of Commissioners welcomed state representative Michael Wray to their regular meeting here on Dec. 6.

Wray, who represents Northampton and Halifax counties in the state legislature, spoke to those in attendance about funding local needs through the recently-passed state budget.

“Working together works,” Wray said in his opening remarks. 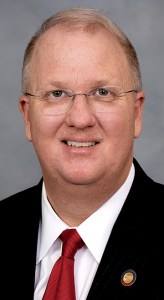 In addition to a $14 million grant for the county to construct a new courthouse, several municipalities will receive funds for different projects.

Seaboard will receive $4 million for a water project, while Rich Square will receive $300,000 for flood mitigation efforts. Both Conway and Jackson will receive money for revitalization projects, totaling $250,000 and $125,000 respectively. The Severn Volunteer Fire Department will receive $350,000 to purchase a new fire truck.

Wray explained that he’d heard about the fire department’s struggle to raise money, which is why he added funding for the fire truck into the budget. He also asked the commissioners to consider taking a closer look at fire tax districts in the county in the future.

The state budget included the conveyance of Odom Prison to the county. Wray said having that facility in the hands of the county would be an asset to the community, especially with plans to include a juvenile detention facility there as well.

In his remarks, Wray also referred to statewide funds for broadband which should help expand access locally.

“We’re trying to get it as fast as we can,” he said, noting that Roanoke Electric Cooperative has been a great partner in the efforts.

Wray announced that the state budget also designated part of the Roanoke River as a “Blueway” paddle trail, and there was funding for the NCDOT to continue local projects, such as the widening of Highway 158.

The budget also included $2.5 million for a statewide “Failure Free Reading” program to support middle school students who read below grade level. Wray stated that Conway Middle School is authorized to participate in the program.

“We’re doing a lot of good things. We can’t do it by ourselves. This is what democracy’s all about,” Wray concluded.

Board Chair and Interim County Manager Charles Tyner expressed gratitude for the report as well as all the hard work that went into the budget this year.

“We did everything we need to do to make sure that we will receive the fundings that we have,” he said.

A groundbreaking for the new courthouse is scheduled for 12 noon on Friday, Dec. 17. The location is the farm field adjacent to the State Employees Credit Union.