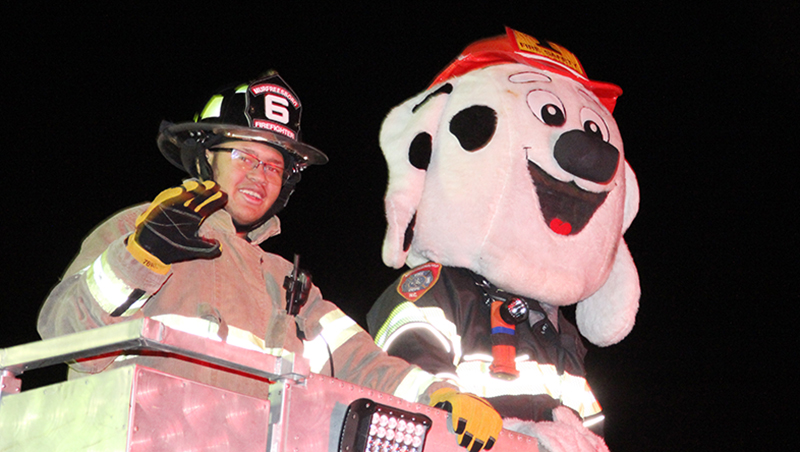 A Murfreesboro firefighter is joined by Fire Pup as they ride atop the town’s aerial truck during Thursday night’s Christmas Parade. Staff Photo by Cal Bryant

MURFREESBORO – Despite cold temperatures, the warmth of the holiday season made it more tolerable to be outside on Thursday night in Murfreesboro where the local Chamber of Commerce conducted a Christmas Parade.

Main Street in the business district was packed with onlookers who were treated to a festive event filled with all the sights and sounds of this most wonderful time of the year.

Town officials riding in the parade noted the large number of parade spectators.

“It’s the most I’ve ever seen at our Christmas Parade,” said Murfreesboro Mayor Hal Thomas.

Thomas added that the size of this year’s crowd was perhaps due to last year’s parade being canceled due to an abundance of COVID-19 cases at that time.

“People want to get back to normal, and a Christmas parade is just what the doctor ordered,” the Mayor noted.

Following the parade, youngsters enjoyed an opportunity to share their Christmas wish lists with Santa and Mrs. Claus who were seated on the front porch of the historic Roberts-Vaughan House. Nearby was a machine blowing artificial snow that attracted the attention of the young and the young at heart.

See the Roanoke-Chowan News-Herald’s Facebook page for more photos from the event.