AHOSKIE – A quick flurry of three-pointers over the final three minutes of the third quarter lit the fire under Ridgecroft’s varsity boys team as the Rams advanced to the championship game of the Doug Cobbs Scholarship Basketball Tournament with a 69-47 win over Southampton Academy here Thursday night. 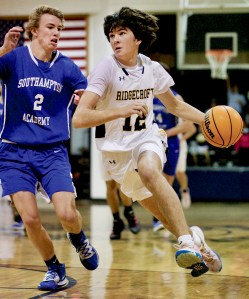 Sawyer Chamblee drives past Southampton Academy’s Hunter Hurst en route to two of his game-high 23 points that led Ridgecroft to a 69-47 win in Thursday’s semifinal round of the inaugural Doug Cobbs Scholarship Basketball Tournament. Photo by William Anthony

Ridgecroft met Pungo Christian in Friday’s tournament championship game that was not completed prior to the deadline for Saturday’s RC News-Herald.

Clinging to a narrow 38-33 lead, Sawyer Chamblee sandwiched a pair of three-pointers around a trey from teammate Baylor Edwards over a span of 56 seconds. By the time Chamblee added a running one-hander in the lane – part of his game-high 23 points – the Rams built a double-digit lead (49-38) heading into the fourth quarter.

A basket each from Southampton’s Jayden Applewhite and Hunter Hurst got the Raiders to within 51-42 with 6:41 left in the game, but three straight Ridgecroft baskets – a bucket each by Justin Peterson, Will Revelle, and Chamblee – got the Rams offense rolling. Another triple from Chamblee stretched the Rams lead to 17 (60-43) with 4:41 left.

That lead would grow as high as 23 points (68-45) inside the final two minutes thanks to six straight points (a one-plus-one and two field goals) by Caleb Porter.

Ridgecroft led 15-11 after the first quarter of play. That advantage reached double figures (25-13) three minutes into the second quarter thanks to an offensive surge sparked by Peterson’s steal and layup and a basket from Chamblee.

Southampton rallied behind the hot hand of Hurst who buried back-to-back treys from deep in the corner to get the Raiders to within 25-23 with 1:31 left in the period.

In addition to Chamblee’s offensive effort, Porter also scored in double figures with 10 points while three others – Peterson, Revelle, and Edwards – nearly reached that mark by adding nine points each.