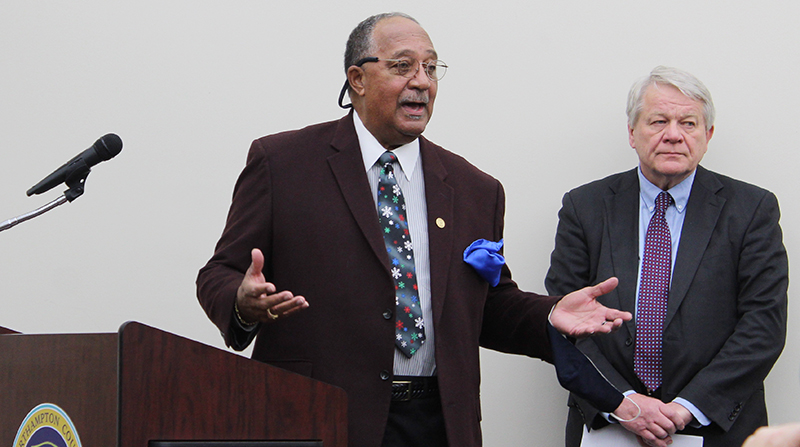 North Carolina State Board of Education member J. Wendell Hall addresses the Northampton County school board at their special called meeting on Thursday night in Jackson. At right is Alan Duncan, Vice Chair of the State Board. Staff Photo by Holly Taylor

JACKSON – A sense of determination and disappointment clashed in the boardroom where the Northampton County Board of Education held a special meeting on Dec. 2 to welcome the district’s new interim superintendent.

Following a decision that same day by the State Board of Education to suspend Northampton School Superintendent Dr. Pamela Chamblee with pay, Dr. Del Burns was appointed to serve as interim.

Alan Duncan, Vice Chair of the State Board, attended Thursday night’s meeting to explain the decision and introduce members of the State Board and representatives from the Department of Public Instruction (NCDPI) which will help the district move forward.

“This was not done lightly, nor was it done without much thought and consideration by many people. This was an important decision,” Duncan explained. “The state board approaches this task with a great deal of humility. We know you have enormous knowledge about Northampton County and its needs.”

Duncan emphasized that they want to work collaboratively to support the district, and ensure that all actions are child-centered and child-focused.

“We cannot let adult issues get in the way of doing the very best we can for our children,” he continued. “We are deeply concerned yet very optimistic about the children of Northampton County, and their educational opportunity.”

Dr. Catherine Edmonds, who currently serves as NCDPI’s Deputy State Superintendent of the Office of Educational Equity, will lead NCDPI’s Assistance Team along with a district leadership coach and several other school leadership coaches.

She explained that their team will be available to provide whatever resources are necessary for improvement.

“I’ve had the privilege and honor of working with Dr. Burns as a former superintendent,” Edmonds added, noting that his work beforehand helped her be successful when she stepped into the role.

Edmonds previously served as Superintendent of Bertie County Schools, beginning in 2018, following a stint by Dr. Burns as that district’s interim.

J. Wendell Hall also addressed those in attendance at Thursday’s meeting. Hall currently serves on the state board as well as the Hertford County Board of Education, and in the past has served as an interim superintendent in Northampton. 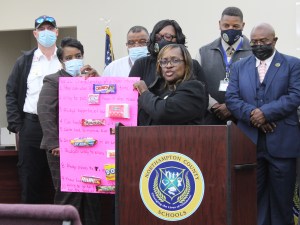 Northampton Schools Superintendent Dr. Pamela Chamblee displays a poster made by two students during a press conference on Tuesday. Chamblee was suspended from her job two days later. Staff Photo by Holly Taylor

“I’m at your disposal,” he said, offering support during this change. “I am committed, the state is committed, our assistance team is committed, to do whatever we can for the board, for you, for instructional leaders, for whomever, to make it a better day.”

Hall noted that the children will be future leaders one day, and they deserve the best education.

“We’re going to venture to a world unknown, but we’re going to do it together. Let’s do the job we were assigned to do,” he concluded.

Following that presentation, Northampton Board Chair Rhonda Taylor asked her fellow board members if they wanted to share comments.

“I’m looking forward to working with Dr. Burns, DPI, and the state board for the improvement of Northampton County Schools,” said board member Lucy Edwards. “I am a passionate educator. I look forward to our students achieving the very best that they can. This is what we owe them.”

Board member Theresa Scott opened her remarks by saying it was a “bittersweet” day, expressing disappointment by the state’s decision to suspend Dr. Chamblee.

“She was truly a woman of integrity and honor,” Scott said of Chamblee. “She persevered, even when the fiery darts came.”

Scott did not name anyone, but accused many of being “blinded by the hate and jealousy of the awesome Dr. Chamblee, who always said she was humble and grateful.”

In her remarks, Scott also noted that the district had received many accolades during Dr. Chamblee’s tenure as superintendent, which began in 2019.

But despite her disapproval of the state board’s decision, Scott also stated she would “let the main thing be the main thing” and focus on student needs.

“I’m going to work with Superintendent Burns because it’s for our children, but trust and believe Dr. Chamblee was a woman of integrity. I thank God for her,” she concluded.

Similarly, board member Tony Burnette expressed disagreement with the decision, and claimed Dr. Chamblee wasn’t given “due process under the law.” He also referenced events of June and July 2020, when Dr. Chamblee’s contract was terminated by a majority vote of the previous board, and then rehired by a majority vote of the current board two weeks later.

He stated the district had been improving under Dr. Chamblee’s tenure.

“Why are they silencing Dr. Chamblee now,” he questioned. “Some would have you believe that they did it based upon my statement to them [the state board].”

Burnette said his statement to the state board was this: “State Board, you need to come in and take over because we have a dysfunctional school board. Take away the school board from the school district.”

As previously reported by the News Herald, the Northampton board approved the hiring of an attorney for a personnel investigation during their meeting on Oct. 11. It was stated the attorney would be paid $225 per hour for his services. Burnette and Scott both cast dissenting votes in that decision.

“Stop the witch hunt,” he exclaimed. “Stop attacking this person, and today she had to suffer another indignity. And I cry out for her and her family being put through this once again.”

Burnette did not identify anyone by name as the subject of the investigation.

He concluded his remarks by saying he was hurt by the decision to suspend Dr. Chamblee, but he offered his full support to Dr. Burns “because our children need to be able to move forward.”

Board member Barbara Stephenson simply shared a short proverb as her comment and urged the board members to “get wise.”

Vice Chair Dr. Marjorie Edwards did not make any personal comments but did read a press release on behalf of the board chair.

“The Northampton County Board of Education would like to be clear that it has always supported and continues to support any assistance the Department of Public Instruction can provide to improve education for Northampton County Schools students,” she read, noting that the board is committed to working together with the state board, NCDPI, and the interim superintendent.

Taylor also prepared her own statement that she said addressed questions she had received from the public.

“Questions have been raised regarding the timing of the scheduling of this meeting,” Taylor began, referring to the special Dec. 2 meeting which was announced earlier in the week.

“Please note that on Nov. 8, 2021, representatives from the State Board of Education and DPI met with the board members to discuss DPI’s assistance team,” Taylor continued. “We were told at that time that the State Board of Education would be reviewing the matter on Dec. 1 and 2, and that a possible outcome could be the suspension of Dr. Chamblee.

“During this meeting on Nov. 8, it was the consensus of the board that DPI’s assistance team continue working with our staff and superintendent to improve the education for our students. During those same comments, as Mr. Burnette stated, he told the group that DPI needed to intervene and take over Northampton County Schools, and that Northampton County Schools would not improve without DPI’s intervention.

“The DPI and State Board representatives reminded us at that time that the first step in a DPI takeover was the suspension and possible removal of the superintendent.

“While we find ourselves in this unprecedented situation, on behalf of the board, I can assure you all we are committed to working with DPI and the State Board of Education to provide the best opportunities for our students to be successful,” Taylor concluded.

After the board finished their comments, Dr. Burns had the opportunity to address the board and the public in attendance.

“The decision that was made by the state board, I am certain, was not an easy decision to make,” he said.

Burns stated that he thoughtfully considered the opportunity to serve as the interim superintendent. He added that he grew up in rural North Carolina, and knows that there are great people and students in this part of the state.

Burns said he planned to work closely with Northampton’s school board, noting that they are the experts in knowledge of the school district. He said he was looking forward to working together, and he vowed to do that work diligently.

Dr. Burns has served as interim superintendent in many districts across the state, including Alamance-Burlington, Edgecombe County, Orange County, Bertie County, Nash-Rocky Mount, and New Hanover County school systems. He was also served in the past as superintendent of Wake County Schools.

With comments from all parties concluded, Taylor then called for a motion from the board to dismiss the confidential personnel investigation.

But when Taylor called for discussion of the motion, Burnette questioned the timing of the dismissal.

“Why now,” he asked, repeatedly.

He also asked how much money is owed to the hired attorney.

Taylor answered about $1,000, which was confirmed by Board Attorney Rod Malone.

When Burnette questioned again why the move to end the investigation now, Taylor responded with “well, she is no longer in here, at the moment, so there’s no need.”

Stephenson chimed in that she did not think the investigation should be dismissed yet. “If you started an investigation, whether the person is here or not, I think we need to continue,” she said.

The discussion continued, getting a bit heated, as Burnette accused Taylor of revealing who the investigation was about.

No names, however, were mentioned at any point during this discussion, nor earlier in the meeting when Burnette referred to the investigation during his comments about Dr. Chamblee. Both Scott and Stephenson joined the discussion as well, raising voices to talk over each other until Taylor banged the gavel to bring the meeting back to order.

Taylor then called for a motion to adjourn the meeting instead, which was quickly made and then passed unanimously by the board.