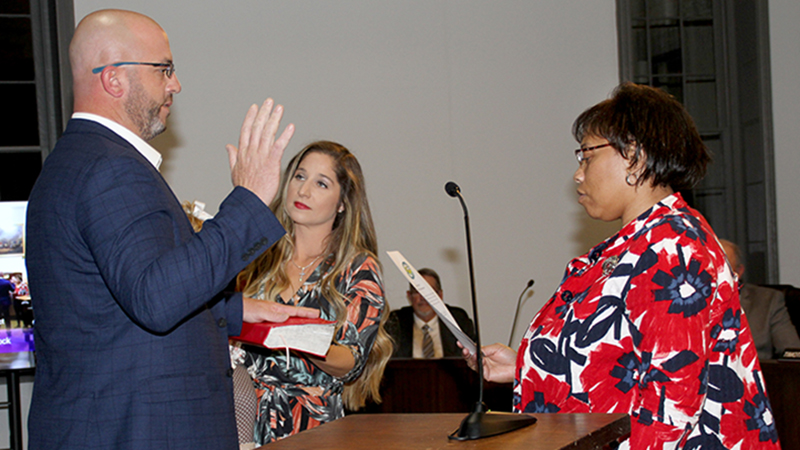 With his wife, Leah, holding the Bible, Jonathan T. Craddock accepts the oath of office to fill an unexpired term on the Gates County Board of Commissioners. Joleatha Chestnutt (right), Clerk to the Board, administered the oath at last week’s regularly scheduled commissioners’ meeting. Staff Photo by Cal Bryant

GATESVILLE – Several months after having no voice on the Gates County Board of Commissioners, residents of the Eure District (Hall Township) can now boast of having a representative.

Craddock, born and raised in Eure, is a graduate of Gates County High School. He attended Roanoke-Chowan Community College where he studied Industrial Welding Technology prior to moving to Greenville to continue his education at Pitt Community College. He later returned to Eure and began his career with Repair Tech in Franklin,

VA where he held supervisory positions for many years.

In 2015, Craddock began his career at International Paper in Franklin, VA where he has continued to hold leadership positions, currently serving as Operations Maintenance

As a county commissioner, Craddock said he will work with a “servant’s heart and a Godly mindset to serve the residents of the Hall Township and the citizens of Gates

He is married to Leah Overman Craddock and they have two daughters, Gwyneth and Libby. The family attends Happy Home Pentecostal Church in Tyner.

In order to replace Jones, county officials were required to follow North Carolina General Statute 153A-27 in conjunction with NCGS 163-10. That initially required the Executive Committee of the Gates County Democratic Party to meet and nominate a replacement to fill the vacated seat. That individual was required to be a registered Democrat and reside in the Eure District.

At last week’s Commissioners meeting, it was noted that Pitt Godwin, legal counsel for the board, guided them through the process, which included the involvement of the county’s Democratic Party.

As part of selecting Craddock, the board approved a resolution that, in part, stated “the executive committee [Gates County Democratic Party] has duly nominated and voted and presented the person of Jonathan T. Craddock, a citizen of Gates County from the Eure District, as the fit and suitable person to fill the vacancy for the unexpired term for the vacating commissioner.”

Jones, who was elected in 2018, resigned effective Oct. 11 of this year, citing concerns with his health and wanting the opportunity to spend more time with his family.

His term expires in December of 2022.