As part of a tour of the R-CCC campus, Advanced Manufacturing instructor Keith Horne (right) points out an area of interest to Rich Square Town Commissioner Linwood Bryant. Staff Photo by Cal Bryant

AHOSKIE – Two years removed from a troublesome period in its 54-year history, Roanoke-Chowan Community College has rebounded to point where its enrollment numbers are the best statewide.

In the summer of 2019, the Southern Association of Colleges and Schools Commission on Colleges (SACSCOC) Board of Trustees voted to place R-CCC on probation after school officials failed to comply with several of the Association’s core requirements. 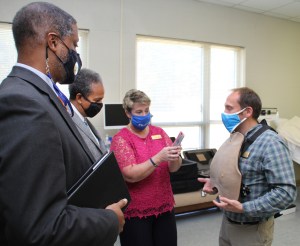 Michelle Warren (center) and Will Blanchard (right) demonstrate the use of an Adocan Wearable Simulator to, from left, Ernest Cooley and Bobby Jones of Hertford County Public Schools. Staff Photo by Cal Bryant

Now with a new leader, the college is bursting at the seams with enrollment, new course offerings, and newly christened satellite learning centers.

Last week, R-CCC President Dr. Murray J. Williams, who was hired in March of this year, was joined by several members of her staff they hosted “College and Community Conversations” at the college’s main campus in Union.

“We are changing lives through education,” Dr. Williams stressed at that gathering held in the main auditorium. “Through a variety of degree and certificate programs as well as through continuing education classes and career readiness classes, we prepare students for the workforce, for public service, and/or for college transfer.”

That student body includes high school students that are getting a head start on their postsecondary education. Williams noted that over the past five years, R-CCC has awarded nearly 400 Associate degrees and certificates to those high school students.

Over that same time period, she said R-CCC has trained over 14,000 individuals for the workforce in areas such as Allied Health, law enforcement, fire/rescue, EMS, occupational services and customized training. The R-CCC Small Business Center has 10 new start-ups in five years.

That has led to a hike in enrollment.

“Overall enrollment for the college has increased by 53 percent from last fall. The highest increase among the state’s 58 community colleges,” she added.

R-CCC has benefitted from a pair of grants through the Golden Leaf Foundation.

“Those grants are helping R-CCC expand its footprint in Northampton and Bertie counties,” Dr. Williams stated of the combined $778,000 in funding.

In Bertie County, R-CCC has branched out to the Lewiston-Woodville Education Vitality Center. R-CCC has also partnered with the new Northampton Career & Technical Academy of Innovation, located on the campus of the former Northampton High School-East near Creeksville. 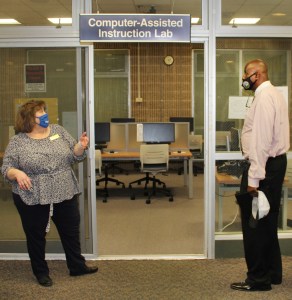 Murray said among the programs planned to be offered by those educational partners include commercial truck driving, HVAC, Allied Health, and some of the college and career readiness courses.

“Our data is currently showing a substantial need for Allied Health workers,” Dr. Murray noted. “We are expanding the faculty in our nursing program as well as other Allied Health programs so we can meet that need. Currently there are over 400 jobs available in our service area for registered nurses as well as other medical professionals.”

While building partnerships among local school systems and businesses remains as part of R-CCC’s primary focus, so are other building blocks. As examples, Murray cited community partners such as local faith-based leaders and the formation of Program Advisory Councils. She said the partnerships built with local churches has led to them opening up space to hold educational classes as well as offering transportation for R-CCC students.

As for the Advisory Councils, Murray said, “we do not develop curriculum in a vacuum, we have to have input from our business and industry partners to help meet their needs.”

Murray praised the efforts of the R-CCC faculty, staff, and the board of trustees.

Meanwhile, R-CCC also realizes the needs of its students outside the classroom.

“Our faculty and staff have developed a food pantry and a clothes closet so that our students will have food to eat and clothes to wear,” Dr. Murray said. “Our students are our top priority. Sometimes they come to us hungry and homeless, or in need of transportation to attend class. We need to be able to provide those needs.”

Other priorities, she said, include offering world class labs for high demand career programs and retaining qualified preparing for R-CCC’s reaccreditation, which is scheduled for June 2023.

She closed by saying that R-CCC is a key driver to the local economy. A recent report by the state showed that the college has a $41.1 million impact on its service area.

“We have value as we provide a talent pipeline to our local businesses and industry,” Dr. Murray stressed. “The education our students receive here allows them to earn a higher wage in the workplace. We also added value as a good education leads to lower crime rates and lower unemployment rates.”

As part of last week’s program at the college, two R-CCC students shared their stories of educational success.

Sterling Levine, a native of New Jersey, said he became familiar with the Roanoke-Chowan area when accompanying his parents during their summer trips to visit family members living in Gates County.

“It was such a nice area here that I decided to move,” Levine said. “I chose to attend RCCC to fulfill my dream of helping people; I enrolled in the nursing program. It’s a vital job, one where you can make a positive difference in the lives of people. This school has welcomed me with open arms. There’s no place that I’d rather be other than R-CCC.”

“I’m currently enrolled in courses where I can earn an Associate in Science degree and a CNA certificate with the intent to enroll in nursing school once I graduate from high school,” Wiggins said. “I’ll be able to do that in four years.” 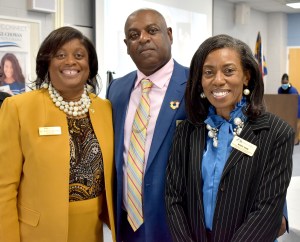 Wiggins added that the staff at Early College High School and R-CCC are very helpful.

“I feel comfortable here,” she said. “As a student here I’ve become a more responsible person, learning how to better manage my time and how to better communicate with my teachers and my peers.”

Also taking part in the event and offering highlights of their roles at R-CCC were Teikeshia Archer, Division Director of Business and Vocational/Industrial Technologies, and Jamie Burns, Allied Health Program Director.

Archer touched on how the college has built partnerships with many local businesses, allowing for work-based learning experiences for R-CCC students.

She added that R-CCC has certified Chowan University employees in a Refrigerant Class so that they can repair and service equipment on their campus. With Perdue, R-CCC trains employees to set up and troubleshoot Program Logic Controls.

“We expanded our course offerings to meet the growing demand of multi-skilled healthcare workers here in our area,” Burns remarked. “All of our courses have high enrollment.”

“That program is a pathway to our nursing program here,” Burns noted, adding that numerous graduates of that program are employed locally while a few others are now teaching the next generation of nurses.

She added that for the first time this semester, 15 R-CCC Allied Health students received the State Employees Credit Union Scholarship. Other scholarship opportunities are available through Golden Leaf, Project Skill-Up and GEAR.

“This is what we do here at R-CCC; we prepare students for careers through quality education. Over the last 20 years, Allied Health has established deep rooted community partnerships that meets the employers’ needs while R-CCC continues to grow those programs to meet future needs,” Burns concluded.

Following a break for lunch, tours were given of the R-CCC campus. At the tour stops, information/demonstrations were provided by Carol Anne Hankinson at the Learning Resources Center, Keith Horne in Advanced Manufacturing, and Michelle Warren and Will Blanchard in the Nursing Program and EMS Program.