WASHINGTON, DC – G.K. Butterfield said the time has come to “pass the torch.”

The nine-term U.S. Congressman representing North Carolina’s First District ended weeks of speculation on Thursday by announcing his decision to retire at the end of his current term, which ends in 2022. 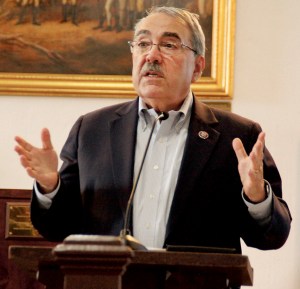 Rumors had swirled locally regarding what Butterfield might do following the recent approval of new Congressional district maps by the North Carolina General Assembly. Political analysts say the new map dilutes some of the minority voting strength that has been historically present in Butterfield’s district.

Butterfield alluded to that point on Thursday when he announced his retirement in a YouTube video.

“Every 10 years, North Carolina is expected to draw a new congressional map,” he stated. “The map that was recently enacted by the legislature is a partisan map which is racially gerrymandered. It will disadvantage African American communities all across the First Congressional District.

“I am disappointed, terribly disappointed with the Republican majority legislature for them gerrymandering our state’s congressional districts and putting their party politics over the best interests of North Carolinians,” he added.

Despite a vow by his political party (Democrat) to challenge the new map in court, the 74-year-old Butterfield said the time has come for him to retire.

“I have made the difficult decision that I will not seek re-election to the United States House of Representatives,” he said in the video. “It is time for me to retire and allow the torch to be passed to someone who shares the values of the district and can continue the work I have labored so hard for the past 18 years.”

He went on to offer thanks to those who have offered their support to each of his successful reelection bids since first taking office in 2004.

“God has blessed me with a loving family and a host of loving friends,” the Congressman said. “I’ve also been blessed with very dedicated staff in Washington and North Carolina. No member of congress can do the work without competent and loyal staff. My staff and my former staff, there are dozens of them, are also my family and I want to take this opportunity to thank each of them.”

He said his tenure on Capitol Hill has been one he treasures.

“I have developed bonds of friendships with Democratic and Republican members of Congress, friendships that will endure for a lifetime,” Butterfield stressed. “I have served on the very powerful and important committee on energy and commerce and in the House Democratic leadership as the senior chief deputy whip under the leadership of former President Obama, President Biden and speaker Nancy Pelosi.”

He spoke of the legislation he helped to craft and pass, “empowered millions of Americans of all persuasions who have been denied the American dream.

“I am proud of my work in Congress on behalf of my constituents and I know that my life’s work of fighting for greater fairness and equity will not cease even after the close of the 117th Congress. While the challenges our nation faces are great, I am confident that our best days are yet ahead,” Butterfield noted.

He also thanked the residents of the First Congressional District for allowing him to represent them in Congress.

“Serving my community, my state and my country has been one of the greatest privileges for which I will be forever grateful,” he said.

Government officials in the Roanoke-Chowan area commended Butterfield for his leadership and friendship over the years.

“Thank you for your years of service to our state and our district,” said Tammy Lee, Chair of the Bertie County Board of Commissioners. “It’s been a pleasure to have you visit in Bertie County and for me to visit you at your DC office. You always had a listening ear and sound advice. May God bless you in your retirement days.”

“The Gates County Board of Commissioners would like to thank Congressman Butterfield for his 18 years of service to North Carolina’s 1st Congressional District,” stated Dr. Althea Riddick, Chair of the Gates County Commissioners. “I was surprised to hear that he decided not to seek reelection and will retire when his term ends in December 2022, but as a champion on voting rights, I understand his frustration.

“Congressman Butterfield’s 50 years as a public servant in North Carolina were not in vain, as he always exhibited the courage to stand for justice for the underserved areas of North Carolina. We wish him the best in his future endeavors,” Riddick added.

“G.K. Butterfield has been a great advocate for the needs of our rural district,” noted Ronald Gatling, Chairman of the Hertford County Board of Commissioners. “He met with our board just a few weeks ago where we discussed how the Build Back Better plan will benefit our county. He has always made himself assessable and has attended many of our local events as well as issuing proclamations to recognize our citizens. He has also been a big supporter of Special Olympics. On behalf of our citizens, I thank his for his many years of public service….he will be missed.”

Butterfield’s career as an attorney began in Wilson County in 1989. He later worked as a Superior Court Judge before earning a seat on the North Carolina Supreme Court.

“Representative G.K. Butterfield has been a key member of the North Carolina delegation and he will be missed,” said US Senator Thom Tillis (R-NC). “It has been an honor working alongside him to secure key wins for HBCUs, infrastructure projects, and economic development for eastern North Carolina. I look forward to continuing our work this Congress to finally grant full federal recognition to the Lumbee Indian Tribe.”

Former North Carolina Senator Erica Smith of Northampton County stated, “Rep. G.K. Butterfield has committed his entire career to community and public service. His retirement leaves us with big shoes to fill in Congress. Through more than thirty years of local, state and national leadership, his unwavering commitment to civil rights and economic justice have made North Carolina better, and have inspired me personally to become part of the movement for change. I do not think I’d be who or where I am today were it not for Congressman Butterfield’s leadership and mentorship. I congratulate him on an incredible career and wish him a happy retirement filled with love and family.”