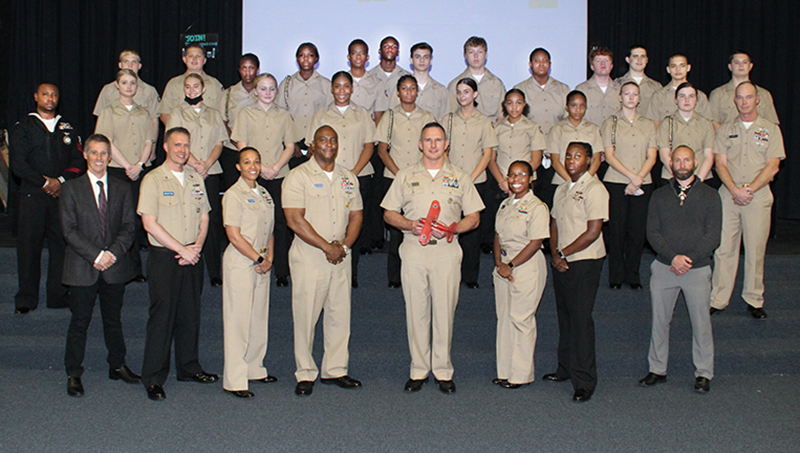 Rear Admiral Scott F. Robertson (front row, center) is shown with members of his staff along with the Navy National Defense Cadet Corp at Gates County High School and school officials during his visit on Nov. 9. Staff Photo by Cal Bryant

GATESVILLE – He has circled the globe as a U.S. Navy officer, helping to protect the high seas onboard three aircraft carriers, four cruisers, and a frigate.

He has honed his skills as a Surface Warfare Officer and as an Air and Missile Defense Commander. 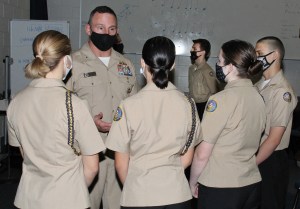 He served the Navy’s Training and Readiness Center as an Air Defense instructor, and also has career experience as a Resources and Acquisition Manager and Commanding Officer of Surface Warfare Officers School,

He worked in the Pentagon.

Last week, Rear Admiral Scott F. Robertson was able to add one more place he has toured during his 35-year military career with his first-ever trip to Gates County High School. He scheduled the visit months ago upon learning that the school was adding the Navy National Defense Cadet Corp (NNDCC) program at the start of the current school year. That program is modeled after the Navy Junior Reserve Officers Training Corp (NJROTC) and provides a similar program designed to expand students’ opportunities to gain the values of citizenship, service to the United States, personal responsibility and a sense of accomplishment. 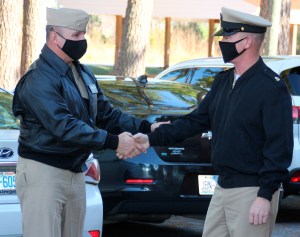 With Chief Petty Officer John Howard, Naval Science Instructor at GCHS, as his guide, Rear Admiral Robertson toured the school, including the classroom and drill area used by the NNDCC program. He then addressed the cadets as they gathered in the Performing Arts Center on the GCHS campus where the Rear Admiral, who just recently returned from a seven-month deployment overseas as the Commander of Carrier Strike Group TWO, presented a slide show denoting his Navy career and the assignments all over the world. 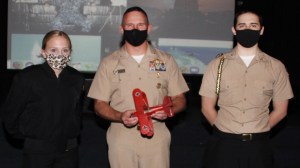 As Commander of a Strike Group, Robertson is responsible for an aircraft carrier, two cruisers, four destroyers, and all the airplanes.

“I want to do whatever I can to add to the foundation of this new NNDCC program at Gates County High School,” Robertson said. “These photos give just a glimpse of what it will look like when and if these young people opt to join the military.”

The collection of “action” photos included the seizure of a foreign fishing boat full of illegal drugs and weapons. After securing the individuals on the boat as well as the drugs, the ship was packed with C4 and was blown up.

Another showed the capture of Somali pirates in 2008 responsible for attacking and robbing vessels in the Arabian Sea and Indian Ocean region.

There were photos showing how supply vessels re-stock needed items, to include fuel and food, on the larger ships of the Strike Group.

Rear Admiral Robertson was shown sitting on two and one-half tons of cocaine, worth $88 million, seized during a hunt for drug runners off the coast of South America.

He was pictured flying with a Navy pilot in a Super Hornet. Another photo showed him and others in the command control room of an aircraft carrier. 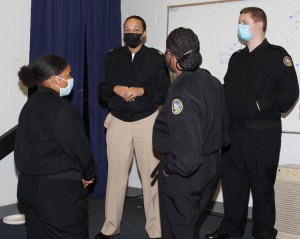 “The Navy gives you the training to hone your skills,” he said.

One of his maps showed the broad scope of maritime traffic on the high seas around the world at any given moment. That maps tracks not only the location of each ship, but what type of goods/cargo are onboard. 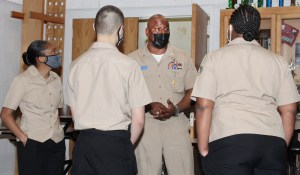 “This stresses the importance of why we need a strong Navy as non-military maritime traffic has increased 300 fold over the past 20 years,” he noted. “We as a country rely on this type of trade. We need to keep the sea lanes open for free trade, not just for our country, but for the entire world.”

Rear Admiral Robertson’s presentation included advice for the young Cadets. He stressed that “if I were in your shoes, I would advise you read to expand your mind, look for opportunities to lead, and keep pushing past your perceived limits….don’t settle for just okay.”

He also noted the skills that young people need to be successful in life, not just from a military standpoint. He said those skills include critical thinking, mental agility, viewpoint analysis, humility, toughness, and to be a team player.

“I was impressed by the way these young people presented themselves today,” Rear Admiral Robertson told the Gates County Index. “I could feel the passion they have to learn more about the NNDCC program. Hopefully they will turn that passion into a career in the United States Navy.”

Following the slide show, the cadets were able to break into smaller groups and speak with the Admiral as well as members of his staff as to what their jobs detailed. Members of the staff accompanying the Rear Admiral to GCHS were Lt. M. Errin Dobbs, Command Master Chief Petty Officer Antonio Perryman, Yeoman Chere Watson, Yeoman Joel Gruber, and Operations Specialist 2 Candyse Robertson. 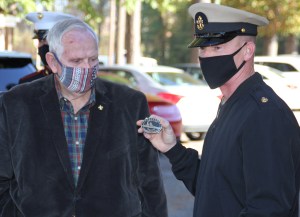 “Gates County Schools has achieved one of our long-standing goals by instituting the NNDCC program at Gates County High School,” said Dr. Williams. “Thank you for being with us today, taking the time to share with our cadets your experiences and wisdom as they accept the challenge to be their personal best and prepare themselves for their future.”

Dr. Williams noted that in just a short period of time, the GCHS cadets and instructor have brought pride and leadership to the school and the community.

“I can see that this pride and leadership will continue to grow as our cadets grow and advance through the program, learning from experiences, their leader Chief Howard, and honorable servicemen such as yourselves,” he said.

“I’ve been more than impressed with what Chief Howard has done with this program in a short period of time. You’ve gotten this program in shape in short order,” said Felton as he presented the visiting military dignitaries with tokens of appreciation.