MURFREESBORO – The seats in the council meeting room of Murfreesboro Town Hall were filled by some not-so-typical occupants at their regular meeting on Nov. 10.

Members of the Murfreesboro Raiders varsity and junior varsity youth football team were in attendance to be recognized for a successful first season. Mayor Hal Thomas read a proclamation at the beginning of the meeting that detailed their success and congratulated them on their accomplishments.

“This is just a testament that shows what can happen when everyone comes together in unity,” said Coach Yahmale Vaughan. 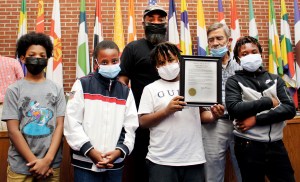 Murfreesboro Raiders teammates Messiah Rodgers, Jaylen Lewis, Jermaine Beale, and Damier Gallo were presented a proclamation by the Murfreesboro Town Council in recognition to the success they enjoyed in their first season playing youth football. Shown on the back row are Coach Yahmale Vaughan and Murfreesboro Mayor Hal Thomas. Staff Photo by Holly Taylor

Some of the team’s equipment, such as endzone pylons and first down markers, were donated by the town. Vaughan also thanked Chowan University for hosting the team for one playoff game. And he also expressed gratitude to those who provided personal donations during the season as well.

“Our varsity team had an undefeated record of 7-0 on the season. They only allowed six points to be scored on them the entire year,” Vaughan said proudly of his team, who also won the league’s “Super Bowl.”

“Our junior varsity team finished as the league’s regular season champions,” Coach Vaughan continued. “We came up a little bit short in the Super Bowl, but we’ll be back next year to win it.”

He noted that the junior varsity team only allowed 18 points on the season, and had a record of 4-2.

“I’m just thankful to everyone in the town for getting behind these young men, and for welcoming us here today,” Vaughan concluded. “These are memories in the lifetime of these children that they’ll never forget as they continue to grow, continue to mature.”