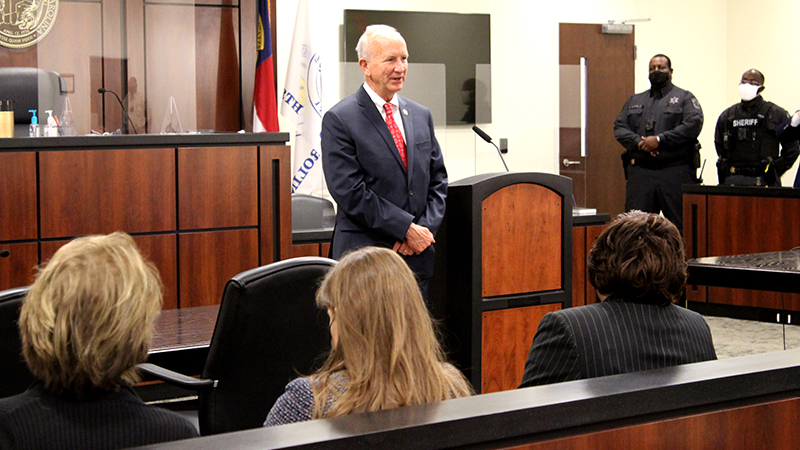 WINTON – It’s not every day that the Chief Justice of the North Carolina Supreme Court makes an appearance at a local courthouse. But in an effort to visit all 100 courthouses in the state, Chief Justice Paul Newby made stops at Hertford, Bertie, Northampton, and Halifax counties on Thursday, Nov. 18.

Once Newby’s statewide tour is complete, it will be the first time a chief justice has accomplished visiting each courthouse across North Carolina.

“It is such an honor and such a privilege,” said District Court Chief Judge Brenda Branch as she introduced Newby during his visit to Hertford County. “He is someone that we feel is a great advocate for our courts.” 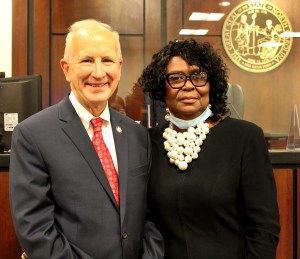 Paul Newby, Chief Justice of the North Carolina Supreme Court, poses for a photo with Shirley Johnson, Hertford County Clerk of Court, during his stop at the Hertford County Courthouse on Thursday. Staff Photo by Holly Taylor

“We are truly delighted to be here,” Newby said in his remarks. “We wanted to thank the essential frontline workers of our courthouses.”

With all of their hard work during the pandemic, he emphasized, the court system was able to provide the vital service of staying open.

“We want the folks here in Hertford County to know that they have a judicial system that renders justice without favor, without denial, without delay,” he added.

In addition to the commitment of open courts, Chief Justice Newby also focused on the importance of treating people who come to the courthouse with dignity and respect. He noted that most people aren’t happy to come to a courthouse, and it’s up to the courthouse staff “to ensure that those folks are treated as best we can under all the different circumstances.”

Along with expressing his gratitude for their work, Newby updated the audience on progress of the e-courts system—which he said would not be implemented until it’s completely ready—and changes to the administrative office of courts which will better assist each county.

To wrap up his remarks, Justice Newby touched on the recently passed state budget, noting that it included the largest judicial branch budget ever in North Carolina. Among other things, all courthouse employees will receive a five percent pay raise as well as a one-time bonus check.

Before his departure for the next stop on his tour, Newby, accompanied by his wife Macon and several of his staff members, spent time speaking with those in attendance while enjoying catered refreshments.

Shirley Johnson, Hertford County’s Clerk of Court, said they were all elated by Justice Newby’s visit. She said it was the first time a chief justice had visited them.

In his position, Newby oversees the more than 6,000 elected judicial officials across the state along with their staff. Johnson said it was great for the courthouse staff to be able to connect with him.

“He’s very personable and such a God-fearing man,” Johnson said. “It was such an honor. He didn’t rush in. He gave us ample time, and he fellowshipped with us.”