FLORENCE, S.C. – History was made for the Chowan men’s soccer team here Sunday afternoon in the Conference Carolinas Men’s Finals with a 2-1 victory over top-seeded Francis Marion to secure their first-ever championship and a spot in the national tournament. 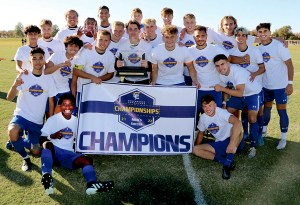 The win gave the Hawks a program record 13 wins in a single-season.

Neither team scored in the first half despite Chowan posting five shots in the opening 15 minutes as James Randall had a pair of shots on target. Tren Drexhage’s headed attempt in the 14′ sailed just wide of the post.

Randall started the second half with a shot on target that needed to be saved.

After some blocked shots, the Hawks would find the opening tally of the match in the 76′ as Ruiz would send in a cross finding De Graaf in front of the goal before depositing the attempt into the right corner for the 1-0 lead.

In the waning minutes of the match, the Hawks continued to push forward toward the corners. Anica-Hernandez would find a wide open Ruiz on the left wing allowing a goal into the right post for the 2-0 lead.

Francis Marion posted three shots in the 89′ as the first shot was blocked by Toby Sims before Farrar had to make back-to-back saves in the string of attack to keep the clean sheet.

FMU was able to find the back of the net with three seconds left to cut the deficit to 2-1.

Making its first NCAA trip in program history, Chowan (13-3-1 overall) will travel to West Florida at 1 p.m. on Sunday, Nov. 21 to open the tournament. In the opening game of their side of the Super Region 2 bracket, seventh-seeded Nova Southeastern will battle 10th-seeded Coker. The winner of that match will face second-seeded Palm Beach Atlantic for the right to battle the winner of West Florida and Chowan in the next round.

To gain the championship vs. Francis Marion, the second-seeded Hawks had to first get by their rivals, Mount Olive, in Friday’s semifinals.

Chowan scored less than three minutes into that match and the defense came up with key plays to preserve the 1-0 shutout win.

The Hawks outshot the Trojans 17-9 in the match and 7-3 in on frame targets. Chowan also took 14 corners in the match.

Chowan mounted an offensive surge from the opening whistle. A shade over two minutes into the match, Ruiz sent in a header that the Mount Olive keeper had to push off the crossbar. The attempt was unsuccessful allowing Drexhage to clean up on the right post for the 1-0 lead.

Mount Olive pushed for the equalizer in the 16′ with a pair of close range shots that were denied by Farrar.

Drexhage tried to make it 2-0 in the 49′ as his shot was turned away by the UMO keeper.

Mount Olive continued to search for the equalizer but came up empty as a shot was blocked before Farrar made a save.

In the latter stages of the match, Randall, Drexhage, Bates, Sam Hall, and Harri Lovett had chances that just missed the back of the net.

The Hawks back line of Sims, De Graaf, Blair, and Lovett aided in the shutout.