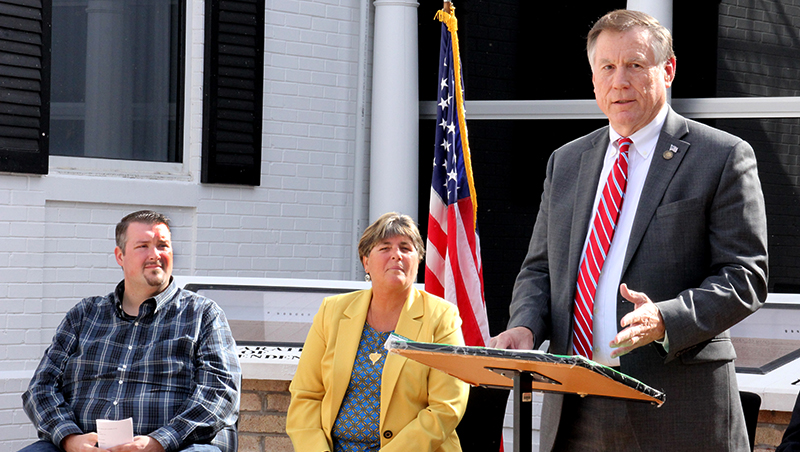 WINDSOR – If Mike Causey had chosen not to serve in the military, he would have broken a long-standing tradition in his family.

Causey, currently in his second, four-year term as North Carolina Insurance Commissioner and State Fire Marshal, was the special guest speaker at a Veterans Day ceremony held here Thursday morning at the Bertie County Courthouse Square. The event was sponsored by the Windsor/Bertie Chamber of Commerce, the Bertie Ledger-Advance, the town of Windsor, and Bertie County.

“We celebrate all Veterans, living and dead, on this special day,” said Causey, adding that he was proud to live in a state that boasts of 100,000 active military members based at Armed Forces installations across North Carolina.

Causey is a Veteran, serving in the U.S. Army during the Vietnam War. 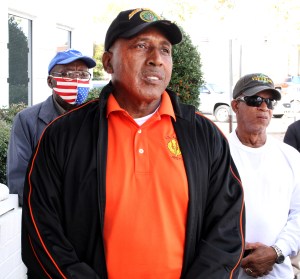 “I was in college at Wake Tech [at that time]. I was going to drop out of school and join the military; I wanted to be a helicopter pilot,” Causey shared with his audience. “My dad, who also once served in the Army, told me I was crazy because helicopters were getting shot down every day.”

He went on to say that his father made him first finish school before joining the military.

“I finished my exams and ended the school year one day, and the next day I reported for active duty,” Causey recalled.

He took Basic Training at Fort Jackson, SC and was then sent to Fort Gordon in Georgia where he completed Military Police School. From there he went overseas to Okinawa, Japan to serve on a base where B-52’s flew in and out for missions in Vietnam.

“Like most of you here today, I have had many members of my family who have served in the military,” Causey stated.

He mentioned that his father and uncle were both in World War II, the latter in a tank battalion assigned to the Second Division.

“My uncle earned a Bronze Star, but he didn’t talk much about being in battle, just like most World War II veterans didn’t say a lot,” Causey said.

Causey said his father’s youngest brother, who is still alive, served on the Honor Guard for General Douglas McArthur during World War II. Meanwhile, his father’s oldest sister was a member of the Women’s Army Corps and served overseas.

A cousin served two tours of duty in Vietnam and made the Army his career, retiring as a Colonel. On his mother’s side of the family there were four brothers serving at the same time during World War II.

“I still have a lot of relatives serving today,” Causey noted, “including one in the Air Force who is a medical doctor and a pilot who has flown with the Thunderbirds.”

Causey shared one of his favorite quotes from General McArthur: “The soldier, above all others, prays for peace as it is the soldier who must suffer and bears the deepest wounds and scars of war.”

He closed by reminding everyone that help for military veterans is available at the Veterans Life Center in Oxford as well as at the Department of Veterans and Military Affairs located in Raleigh.

Following remarks from Causey, military Veterans in attendance were recognized. Each shared brief remarks about their service in the Armed Forces.

Webb Hoggard, the lead pastor at Askewville Assembly of God Church, opened and closed the service with prayer, offering praise and admiration for those who have worn or are still wearing the uniforms of America’s Armed Forces.

Lewis Hoggard, Executive Director of the Windsor-Bertie Chamber of Commerce and Mayor-Elect for the Town of Windsor, gave a brief history of Veterans Day.

“The purpose of this day is to honor those who made the commitment of service, in wartime and in times of peace,” to keep our society the way it is today,” Lewis Hoggard said.

“We are the land of the free because of the brave,” Jim Hoggard stressed, adding that his father fought in World War II.

Lee provided statistics on the number of U.S. Veterans still living, saying there are 18 million across the nation, to include 700,000 in North Carolina, and 1,133 in Bertie County.

“Veterans hold a special place in my heart,” Lee said while mentioning that her father, her husband, and her son were all once members of a branch of military service.

She added that Denise Clark serves as Bertie County’s Veterans Service Officer and is available to meet the needs of local men and women who have served in the military.