After consulting with his family, Dexter A. Hayes announced he is seeking a second term as Sheriff of Hertford County.

For the past four years, Hayes said it has been an honor and privilege for him to serve the citizens of Hertford County. Hayes added that his experience in law enforcement has led him to be a “tested and proven leader.” 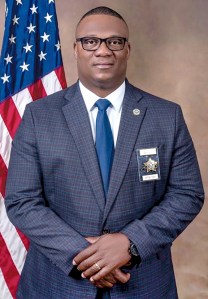 Sheriff Hayes increased his level of law enforcement training an appointment to a professionalism working group that consisted of 10 Sheriffs from all across the state. Their objectives included discussing 21st Century Policing, Background Checks/Investigation for Employment, and a standardized Use of Force Policy for all law enforcement to follow.

Since the death of George Floyd in Minnesota, Hayes has removed the Chokehold Policy from the Sheriff’s Office policy. He implemented the Duty to Intervene Policy, Duty to Report Policy, and De-Escalation Training. Other upgrades include the purchase of more enhanced body worn cameras and the policies regarding the use of those devices.

Since taking office in 2016 and being elected in 2018, it has been one of his goals to modernize the Hertford County Sheriff’s Office by upgrading technology as well as being a visionary leader who leads by example and who understands that the Sheriff’s Office should reflect the community in which it serves.

Hayes pointed to several of his accomplishments over the past several years, to include implementing a partnership between his office and the Sheriff’s offices in Bertie and Northampton counties and the Ahoskie Police Department to form a joint task force to investigate and suppress violent crimes in and around those respective jurisdictions.

He also implemented a grant program to help fund upgrades to the office. He was able to secure $175,000 in grants over a four-year period. Those funds were used to upgrade the in-car computers, office computers, open up an office for the Criminal Investigation Unit, and for various other projects.

Under the Sheriff’s leadership during the pandemic, on March 12, 2020, when Hertford County started working and sheltering at home, the Sheriff Office never stopped serving the citizens of the county.

“The men and women of the Sheriff’s Office, Detention Center, Courthouse security, and Animal Control worked through the pandemic, and it was extremely tough to ensure that the staff was protected,” Hayes said. “A grant was applied and received and was able to purchase PPE for the staff to protect themselves.”

Under his leadership and the hard work of the men and women of the Hertford County Detention Center, only one inmate tested positive for COVID-19.

Hayes partnered with Roanoke-Chowan Community College to start a GED/ Educational Program to assist inmates with obtaining their GED.

The Sheriff’s goals for the next four-year term will be to increase the number of deputies on patrol, increase the starting pay for the deputies and detention staff, and maintain high quality employees to serve and protect the citizens.

To aid in the development of a gang investigation unit for Hertford County, he just recently applied for a federal grant to provide salaries /benefits for two positions, and has secured funding from the state budget, which is awaiting approval.

“It’s my desire to partner with community organizations, to do more outreach in the community to help redirect the youth and stop senseless violence, and to continue to build positive relationships with the citizens so we can work together to suppress the violence that is happening in our neighborhoods,” Hayes said.

“To the citizens of Hertford County, I am asking for your trust and your vote so I can continue to work hard to serve and protect you and your families. So on Election Day in 2022, please vote to re-elect Sheriff Dexter A. Hayes for Sheriff of Hertford County. Thank you and God bless.”