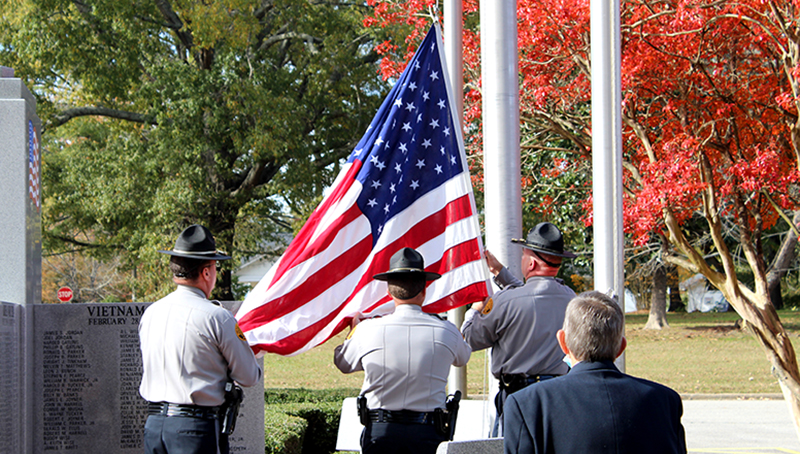 Citizens gathered outside at the veterans’ monument located in front of Town Hall to honor those who’ve served in America’s military. 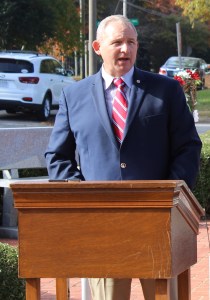 Retired Marine Corps Lt. Colonel Chad Drake was the featured guest speaker for Thursday morning’s event. Drake is a Chowan University and Methodist University graduate. During his Marine Corps career he served several tours of duty and garnered many honors. He retired in 2018 and now lives in Suffolk, VA with his family.

“Veterans Day is a special day. For me, it’s now a day that I reflect on the people who served in this country,” Drake said in his opening remarks.

He noted several wars and conflicts American soldiers have fought in since the country was founded, reminding everyone that freedom comes at a high price. Additionally, he focused on local sacrifice, and read the names of several Hertford County soldiers who died during the Vietnam War.

“As you know as veterans, they were not just names. They were sons,” he emphasized.

Drake also detailed what service as a veteran really means.

“A veteran is one who served honorably and upheld the constitution and the oath sworn to protect and defend against all enemies, foreign and domestic,” he said. “A veteran understands sacrifice and noble honor and a brotherhood. A veteran understands that it’s less about self and always about the team, the unit, the mission, and the country.

“A veteran and their families understand the sacrifice of missing important milestones, potential life changing hazards, and the adventures good and bad that shape an individual family,” he continued. “A veteran is proud of their service and knows the impact that they’ve made.”

Drake urged veterans to continue to serve their communities and make a difference where they can.

“We are called, as veterans, to remind our current generation and the future generation of the sacrifices of this nation. Freedom is costly,” he concluded.

Following Drake’s remarks, members of the Murfreesboro Police Department participated in changing the American flag which flies in front of Town Hall. Each year, on Memorial and Veterans Day, the town flies a donated American flag which has previously flown over the US Capitol.