‘State of the County’ update 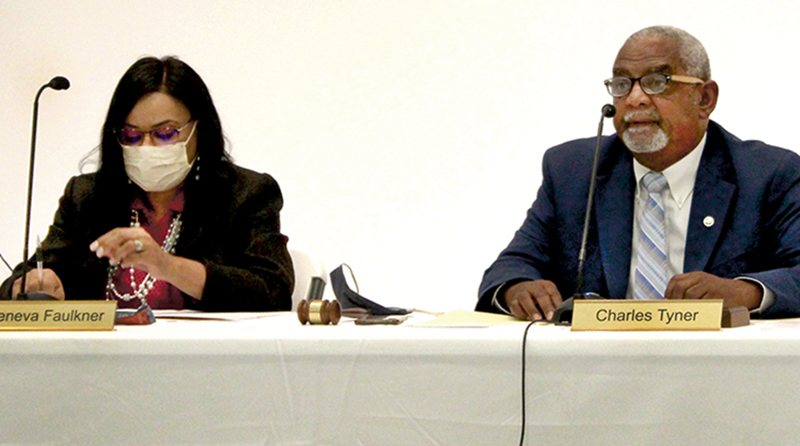 Charles Tyner, who serves in a dual role as Chairman of the Northampton Board of Commissioners and Interim County Manager, is joined at a Nov. 1 meeting by board vice-chair Geneva Faulkner as he provides an update of the county’s finances and projects. Staff Photo by Holly Taylor

JACKSON – Many big projects are in the works right now for Northampton County, according to Commissioner Chair and Interim County Manager Charles Tyner.

Tyner provided a “State of the County” update presentation for the citizens at the commissioners’ regular meeting on Nov. 1. During his presentation, he detailed many of those projects. Some have been in the works for a few years while others are just getting started.

But the presentation began first with a focus on county finances.

“There is a healthy fund balance in Northampton County,” Tyner reported, noting that they are expecting to receive the county’s most recent audit report this month with the most up-to-date numbers.

The previous fiscal year’s fund balance was at $19.3 million, and Tyner estimated that number would be higher for the FY21 audit.

“We don’t want people working for us in poverty,” Tyner said about purpose of the pay scale study.

Though the salary adjustments have not yet been implemented for county employees, Tyner said the upcoming changes would make salaries more competitive.

Additionally, Tyner reported that the county has collected almost $917,000 in back taxes this year, with some people being put on a payment plan to pay what they owe.

But beyond the general financial overview, Tyner spent most of his presentation talking about upcoming projects throughout the county. The most costly of those is a new courthouse building.

“The courthouse we have right now, we cannot repair it to do what we need to do for our court system,” explained Tyner, alluding to limitations on the current building in Jackson, which is registered as a historic landmark.

As previously reported by the News Herald, the courthouse project has been discussed since December 2020, when Superior Court Judge Cy Grant and District Court Chief Judge Brenda Branch both spoke before the commissioners to share concerns about the conditions of the building. At that same meeting, conceptual designs from an architect firm were also unveiled.

In February of this year the commissioners unanimously approved an option to purchase a 10-acre plot of land for the new courthouse in Jackson, located next to the State Employees Credit Union, for a price of $650,000.

At the Nov. 1 meeting, Tyner stated the courthouse project was estimated to cost between $10 million and $14 million, but he also shared that they had been in talks with state representatives about funding for the project. He said the state had agreed to finance the total cost of the project, land included.

Tyner estimated that construction on the courthouse should begin in March.

Another project in the works, also contingent on an agreement with the state, is Odom Correctional Institution. The prison facility, located just outside of Jackson, was shut down by the NC Department of Public Safety in 2019 to relocate workers to other understaffed prisons in the region.

In March 2021, Northampton’s Board of Commissioners unanimously passed a resolution asking NCDPS to convey the facility to the county to be used as a replacement for the county’s current jail.

Sheriff Jack Smith previously told the News Herald in an interview that Odom Prison would be able to hold a larger number of offenders than the current jail, including a separate section for juveniles who currently must be housed in facilities as far away as Greenville, Butner, and the western part of the state. The facility could also be used to house inmates from other nearby counties to cut down on potential overcrowding elsewhere.

Tyner explained during his presentation that the state agreed to convey the Odom facility to Northampton County to include 64 acres of the property along with the existing infrastructure.

“It has its own septic system that’s working. We’ve already checked that out,” Tyner noted.

The property transfer is included in a section of Senate Bill 105, the state budget. It will be effective once the budget is finalized into law, though the legislature and governor have yet to reach an agreement.

Tyner also touched on other ongoing projects, including the Phase Six water expansion (recently funded through the USDA), the Lake Gaston Wellness Center (located on property previously purchased by the county), and improvements to the former W.S. Creecy School building (after having already completed work on reopening the gym facility).

The Wellness Center project at Lake Gaston, in particular, has been the subject of many discussions since 2019. Tyner stated during his presentation that the cost was estimated to be about $8 million, but he said federal money had been committed to cover those costs.

“We want to build it without it being the taxpayers’ burden,” he said, and added, “It’s going to be a money-making venture for the county.”

Another project anticipating federal funding is the workforce housing development project, which will be constructed on land the county previously purchased from Northampton’s school board. The 10 acres of land is located next to Central Elementary School, north of Jackson.

Tyner said with funding promised from representatives in Washington DC, a developer would be able to quickly construct the housing development and make them affordable.

During his presentation, Tyner also announced two projects that have not been discussed before and which are still only in their initial phases. Those projects are wastewater extension between Gaston and Lake Gaston, and development of the Interstate 95 exit on Highway 46. Tyner explained that they’ve just begun seeking USDA funds for the wastewater expansion project, which will help replace many failing septic tanks in the area. He did not share many details of the Highway 46 project yet, but said “they’re in the works” right now.

Following Tyner’s presentation, Commissioner Geneva Faulkner spoke a few minutes about developing a new strategic plan for the county to cover the next few years.

“Just like a trip to your favorite destination, you have to have a plan to get there,” she explained. “We have to have strategic points to get us to our end goal.”

The commissioners previously unveiled their four-year strategic plan in 2019, and progress has been made on many of those points. Faulkner noted, however, that the pandemic had slowed them down on some things.

But work will commence soon on developing another updated plan to continue forward. Faulkner said they welcomed citizen input and a survey will be on the county website sometime this month.

“You elected us to serve you, not ourselves,” she concluded.