MARGARETTSVILLE – First responders arrived at the scene of a plane stuck in the trees off of Highway 186 outside of Margarettsville on Thursday night and managed to safely rescue the pilot.

The incident occurred on Nov. 4 with first responders being paged out around 8:16 p.m., according to Northampton County Emergency Management Coordinator Tony Burnette. Northampton EMS and Seaboard Volunteer Fire Department were the first ones on the scene. 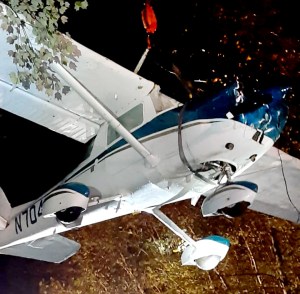 The plane involved in Thursday night’s crash near Margarettsville is lowered from its precarious perch among some trees. The pilot was not injured. Photo by Northampton Emergency Management

“The pilot was coming from Florida, and he said he was enroute to Emporia [VA],” Burnette told the News Herald on Friday morning. “He lost power eight nautical miles away from Emporia, and he glided for about five miles.”

By the time he reached Highway 186, the plane crashed into some trees and became lodged about 30 feet in the air.

“He was able to call it in that he had trouble, and FAA [Federal Aviation Administration] was able to get another plane over him that saw him go in,” Burnette continued. “That plane hovered over him and was able to guide the searchers in to his location. That portion of 186 in Margarettsville is pitch black dark out there. Telephone communication out there is really spotty.”

Burnette did not identify the pilot, but said they were able to communicate with him while he was still up in the air. The pilot reported being cold but uninjured.

The Weldon Volunteer Fire Department provided a ladder truck with a bucket which was able to reach the pilot and safely bring him back to the ground.

“I would like to thank all our first responders for doing an outstanding job and helping save someone’s life last night,” Burnette said.

Burnette also had a special thanks for Clements Mechanical. They worked to dislodge the plane from the trees, bring it safely back to the ground, and transport it from the scene. Once the plane was clear, Burnette said they were able to open Highway 186 back up to traffic, at approximately 1:30 a.m.

The FAA will conduct an investigation into the incident.

“I would say he [the pilot] was the luckiest man in Northampton County last night. God was with him,” Burnette added. “From my viewpoint, I’m just happy with the work that was done last night in helping to rescue this gentleman.”