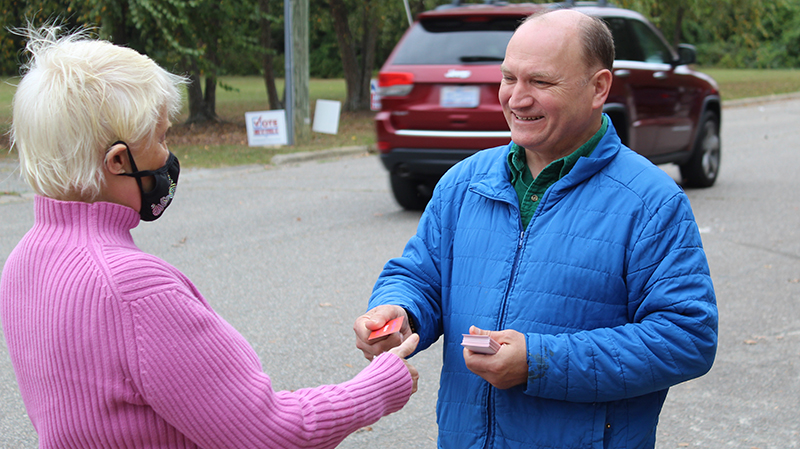 Murfreesboro Councilman Craig Dennis chats with voter Karen Downey on Tuesday afternoon near the front of the town’s polling place. According to the unofficial results from the election, Dennis was one of four Murfreesboro Council incumbents to win reelection. Staff Photo by Holly Taylor

With the exception of a race for Murfreesboro Town Council, Tuesday’s election within Hertford County’s municipalities came and went without much political drama.

Rounding out the balloting were incumbent Sarah Whitley Wallace (193) along with Tim Flanagan and Peter B. Griffith, each with 74 votes.

Meanwhile, the final outcome of the election for the five seats on the Winton Town Council will be determined by counting 181 write-in votes. Only three candidates filed for those five seats and on election day Stephen Piland received 87 votes followed closely by Blake Blythe (81) and Emily (Emy) Winstead (79).

Other municipal elections in Hertford County ended with incumbents in control.

All results are unofficial until the Hertford County Board of Elections conducts a canvass on Nov. 9.

The election for Ahoskie’s Ward A and Ward B along with one at-large seat is delayed until March 2022 due to legislation enacted June 28 by the North Carolina General Assembly. That was necessitated by the fact that because 2021 is a year following the federal census, some municipalities who elect officials by districts or wards must redistrict to correct population imbalances. Town of Ahoskie officials are currently in the process of redrawing the boundaries between Ward A and Ward B to correct a population imbalance.