DOVER, DE – A Gates County native with a proven record of athletic success is now a member of the Delaware State University Hall of Fame.

Mary “Honey” Lamb-Bowman was recently inducted into the university’s Athletic Hall of Fame in tribute to her efforts to strengthen the school’s standing as a leader in women’s sports in the Mid-Eastern Athletic Conference. 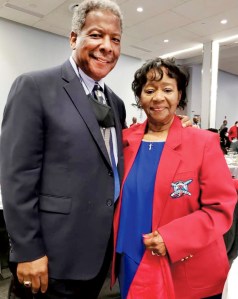 Mary “Honey” Lamb-Bowman is shown with her husband, James, at the induction ceremony of the Delaware State University Athletic Hall of Fame. Contributed Photo

The program’s third season in 1987 was highlighted by a school-record 23 wins (23-6) and .793 winning percentage. She still ranks second on the Hornets’ all-time list with 96 volleyball coaching wins.

In basketball, Lamb-Bowman led the Lady Hornets for 10 seasons from 1985 to 1995, posting 117 wins, tops in program history at the time. In her first season at the helm, she was named MEAC Women’s Basketball Coach-of-the-Year after inheriting a team that compiled a 7-18 overall mark (3-9 MEAC) the previous year and guiding the squad to a school record-tying 18 wins (18-11), including a 10-4 mark in the MEAC.

The following season, she again tied the school record for wins in a season (18-12) and guided the Lady Hornets to the MEAC Tournament championship game for the second year in a row.

She ended her coaching/teaching career in 2019, retiring as a Health, Physical Education & Driver’s Education instructor from TC Williams High School in Alexandria, VA. (The school featured in the famous movie “Remember the Titans.) There she also served as the Girls’ Basketball Coach from 1995-1998 and started the Volleyball program (2000-2002).