The unofficial results from Tuesday’s municipal election in Bertie County saw two newcomers gain seats in Aulander while the final results in Kelford and Roxobel are undetermined due to the number of write-in votes.

All results are expected to be finalized on Tuesday of next week when the Bertie County Board of Elections performs its mandated canvass of all polling numbers. 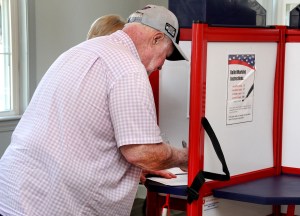 In Aulander, where three Town Commissioner seats were up for grabs, political newcomer Jerome Dail Jr. topped the balloting with 88 votes. Incumbent Jason Tinkham won another term with 86 votes while newcomer Renee’ Draper, the town’s former clerk, gained the third seat with 83 votes.

Five seats were on the ballot for Kelford Town Commissioner. Michael A. Johnson Sr. led with 41 votes followed by John (Timmy) Eaton (33), Ken (KC) Cain (29), Jim T. Harrell (21), and Harvey Wayne Bland (14), However, there are 35 write-in votes, thus leaving the final outcome undetermined until next week.

The same holds true in the race for Roxobel Town Commissioner where 38 votes were cast for a write-in candidate or multiple candidates. As it currently stands, Tuesday’s balloting for those four seats shows Robert Phelps with 44 votes followed by Joseph Pittman (39),

Incumbent Roxobel Mayor Gary Johnson was unchallenged and earned another term with 53 votes.

Windsor also has a new Mayor after incumbent Jim Hoggard retired. Lewis Hoggard takes that job after earning 271 votes. He was unchallenged.

In the race for the two open seats for Windsor Town Commissioner, incumbent Randy Whitaker won reelection by capturing 192 votes. L.C. Hoggard III edged David L. Bunch, 148-144, for the other seat, according to the unofficial results.

In other election results from Tuesday in Bertie County, Askewville Mayor Gloria Bryant won reelection with 11 votes. She was not challenged, and neither were incumbent Askewville Commissioners Michael Baker and Carla Pesce, each with 11 votes, while Kay Brantley had 8 votes.

In Colerain, Will Fairless and Donald H. Sumner Jr. topped the balloting with 12 and 11 votes respectively to gain seats on the Town Commission. The third seat will be determined by the six write-in votes.

Herbert Copeland received 10 votes in Colerain to fill out an unexpired term on the Town Commission.

In Lewiston-Woodville, Mayor Chris B. Cordon won with 55 votes. The Lewiston District seat on the Town Council was earned by DiAnne Bazemore with 51 votes. Linda Gilliam won the Council’s Woodville District seat by defeating Lee Owens, 51-3.