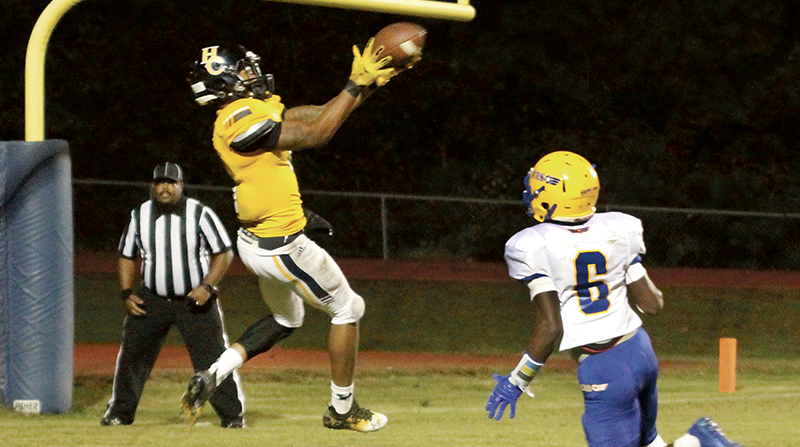 Tyree Coatney leaps to pull in a 15-yard touchdown pass during first half action of Friday’s Hertford County vs. Edenton Holmes game in Ahoskie. Coatney added three rushing touchdowns, but it wasn’t quite enough as the visiting Aces pulled out a 48-38 win. The Bears did however qualify for the state playoffs, which open Friday, Nov. 5. Staff Photo by Cal Bryant

The arrival of colder temperatures coinciding with the end of Daylight Saving Time means one thing across North Carolina – the start of the high school football playoffs.

That annual event kicks-off this Friday night (Nov. 6) with 244 schools across the state in action. Meanwhile, another six schools received opening round byes and advance automatically to the second round on Nov. 13.

All games are sanctioned by the North Carolina High School Athletic Association who will crown state champions in four classifications (1A, 2A, 3A, 4A) on the weekend of Dec. 10-11.

Every public school team in the Roanoke-Chowan area qualified for the state play-offs. That list is led by Northampton County High School, who won their conference championship with a 7-0 record and finished the regular season at 8-2 overall. The Jaguars are seeded #4 in the Class 1A Eastern bracket and have an opening round bye.

Gates County and Bertie are also in the Class 1A playoff bracket.

Hertford County (7-3 overall) earned the #18 seed. The Bears will hit the road for this Friday’s playoff opener as they travel to #15 Clinton (7-2). For HCHS fans planning on attending Friday’s game, Clinton High School uses a cashless admission policy. Tickets can be purchased on the gofan.co website or app. On site entry points will be staffed with individuals to assist fans who have not purchased a ticket in advance. A phone and credit or debit account is necessary to purchase a ticket at the gate.

Other notable state playoff games of local interest on Nov. 6 include:

Class 1A: #24 Chatham Central at #9 Riverside-Martin