The Refuge, a 200 page mystery/romance set in a fictional town in Loudoun County, delivers an inviting mix of developing love and encroaching fear set in a fabulous equestrian estate. 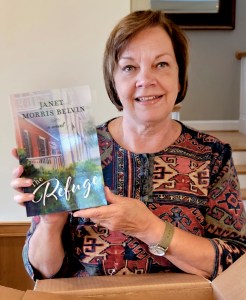 In a setting of pastoral beauty in the horse country of northern Virginia, a bright and beautiful young woman and a handsome, honest widower find each other after a tragedy. Peyton Thurman, a twenty-something London editor, assumes it will only take a few weeks to clear up the legal matters surrounding her parents’ untimely deaths in a plane crash, but settling their estate and selling their home, Greyson Plantation in Loudoun County, Virginia, proves to be more difficult than she expects, even with the help of hunky farm manager Cameron Hill. Someone else wants that inheritance.

Peyton returns to the States to settle her parents’ estate and oversee the selling of their historic mansion where she grew up. What she doesn’t count on is the pull that Greyson would have on her. And seeing the farm manager, Cameron Hill, confuses her even more. Cameron shows her another hidden facet of the farm’s operation, The Refuge. Hidden several miles back in the woods, The Refuge is another colonial-era manse on her family’s estate, one which Peyton didn’t know existed. The Refuge holds another secret, too, one which could threaten Peyton’s very life.

Belvin is also the author of Southern Stories from the Porch Swing, her memoir published in 2018. She has lived in Loudoun for eight years and is a former teacher at Gates County High School. She is an occasional columnist for the Gates County Index and writes for magazines and newspapers in North and South Carolina.

The Refuge is available on Amazon, Barnes & Noble, Walmart, Books A Million, and other bookstores or at Belvin’s online bookshop (https://store.bookbaby.com/book/The-Refuge

Belvin can be reached at janetmorrisbelvin@gmail.com or at her Facebook page Janet Morris Belvin, Author.

One injured in Sunday afternoon shooting