Developing for the future 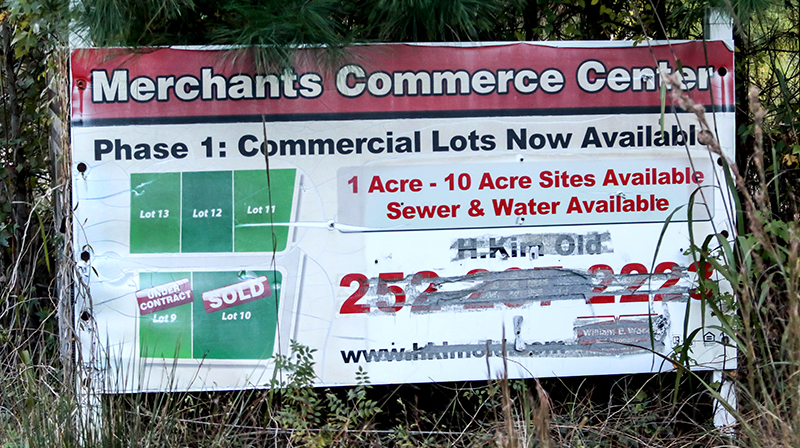 The Gates County Commissioners are currently studying a proposal to purchase property along US 158 near the high school for possible commercial development. Photo by Charles Revelle

GATESVILLE – A proposal to use $600,000 of taxpayer’s money to purchase 145 acres of land for the purpose of economic development was met with mixed reactions here last week during the regularly scheduled meeting of the Gates County Board of Commissioners.

The county’s leadership sees the purchase as a catalyst to entice new businesses to locate to Gates County, which would expand its tax base, thus creating tax revenue instead of levying additional property taxes in the future.

On the flip side, some county residents argue that this particular parcel of property was developed for commercial use years ago (Merchants Commerce Center) and has yet to live up to its earlier billing for possible growth.

The land – located along US 158 adjacent to the State Employees Credit Union and Gates House – is currently owned by Briarwood Forest Products, Inc.

According to documents provided by the county, Pitt Godwin, legal counsel to the county commissioners, and County Manager Tim Wilson have already met with Al Carey, President of Briarwood Forest Products, in regards to this property. They negotiated a price of $600,000, which includes the land and all existing infrastructure (septic, sewer, retention pond, and private roads).

Those negotiations revealed that the seller wished to receive payment on the property in 2022, most likely in January.

The county says it would not have to borrow the money since there are sufficient funds in the general fund to make the purchase.

Following North Carolina General Statutes, a public hearing was held at last week’s meeting regarding the proposed purchase of the land.

Kyle Truman questioned the need to spend $600,000 when that money could be better used to, “handle the unexpected expenses that always pop up when we least expect them.”

“We also have local law enforcement officers that are underpaid,” Truman added. “Many citizens in our community keep wondering how long this will continue and get upset quickly when we think about major spending that is unnecessary.”

“What is the plan for this land if we do purchase it,” Ward asked. “As a citizen, this appears to be a segway to some sort of development. With this type of investment there should be a business plan in a very detailed manner. There should be a timeline that spells out when we the citizens will receive the benefit from this purchase. Unless you are prepared to share this plan with the citizens tonight, there should be a no vote for the purchase of this land. At no time should a handful of people be allowed to spend this type of money without first presenting to the public what the plan would be and when we could see a return on investment.”

Former county sheriff Ed Webb said all those who have owned this particular parcel of land over the decades, “tried to make a go of it, but failed.”

“That piece of property has never been anything more than just a sandpit,” Webb noted. “It wouldn’t even perk when ya’ll tried to put a sprayfield there for the wastewater treatment plant. To see $600,000 of our money spent on land not worth standing on means that money is going down the drain.”

In his presentation, Wilson said the site is strategically located along a major highway and its overall size is suitable to accommodate different types of economic development. The site is situated in close proximity to the high school, middle school, county library, community center, and Merchants Millpond State Park.

“Housing will not be a primary planning objective for this property, despite the county having a lack of homes for sale and rental property,” Wilson said.

However, he did not rule out the possibility of some of the land being used in the future for multi-family housing (town homes).

“There’s no deal finalized at this point,” Wilson stressed.

“They came here because of a need and to make money; that’s exactly what we’re choosing to do, which is to make land available to businesses, to provide goods and services to our citizens, and to provide revenue for the things that we are currently spending tax dollars on,” Owens said. “Our costs are going up and we don’t want to tax our citizens any more, so we’re trying to generate more opportunities that will create revenue for our tax base.”

Owens added there were many services that require local residents having to travel outside of the county to obtain.

“Why can’t we have them in the county for you while the county benefits from the tax revenue base,” Owens stressed. “By owning that property we’ll be able to set certain standards that will be used to have some control over what can be built there.”

Owens suggested the county needs to form a relationship with an expert in commercial real estate to lead the process of developing that land.

“We have had people expressing interest in locating here, but we had nothing to show them,” stated Commissioner Linda Hofler. “This site is centrally located on a major highway. And we need to realize that land isn’t going to get any cheaper. This is our opportunity now.”

Commissioner Ray Freeman said he had his doubts in the early stages of discussing this potential purchase.

“From an economic development standpoint, this is good for Gates County,” Freeman remarked. “We have 240,000 people a year coming to the Millpond [State Park]. Businesses near there can benefit from that volume of visitors. This property has the potential to become a magnet to attract people.”

Commission Chair Dr. Althea Riddick said there is money in the state and federal budgets that can assist the county in developing this property.

“I’ve asked our state and federal officials to help us; we now have partners in high places that are going to help us,” she said. “We have a strategic plan that we’re about to release. That, plus having public land that we can develop, puts us in a good place to move this county forward. We either move now when funding is available or wait when the money is gone and the door closes on this opportunity. The future of our county is now.”

Riddick went on to say that if the county had the retail stores and food establishments, the sales tax and property tax revenue generated by those entities could generate the funds they need to give raises to county employees and make infrastructure improvements that have been delayed.

John Taylor Kittrell asked the commissioners how do they believe they could entice businesses to come to that particular area when businessmen who previously owned the property could not.

“The property has sat there for 14 years and the owners did nothing with it,” he said. “I hope you [commissioners] are really confident in what you’re thinking.”

Kittrell added that he felt there are two particular areas of the county – “sweet spots” as he called them – that are better suited for commercial development: US 13 / US 158 at Tar Heel and US 158 / NC 32 in Sunbury.

Annie Ward ask the commissioners to let the citizens closely study the board’s economic development plan and provide feedback before a decision is reached to purchase the property.

Crystal Saunders noted the lack of commercial development, retail and restaurants, in the county and supported the commissioners’ plan for such growth.

“Change is often hard, but change is needed in our county,” she stated.

“I came to Gates County 40 years ago for a job and would leave on the weekends so I could go out to eat, go out to socialize, and purchase what I needed,” she said. “What do we now have in the county that wasn’t here 40 years ago – Dollar General, Dollar General, Family Dollar, Dollar General. I’m glad to see our commissioners interacting with state and federal officials to bring needed resources here to our county.”

Green-Holley said such opportunities have previously landed at the feet of the county leaders, but they stood by with “closed fists.”

The commissioners have scheduled a two-day retreat on Nov. 7-8 where further discussion is expected on this and other economic development plans.

Owens said he was hopeful that the board would come out of that retreat with an opinion of how to move forward and would communicate that with the public.