‘Victors’ instead of victims 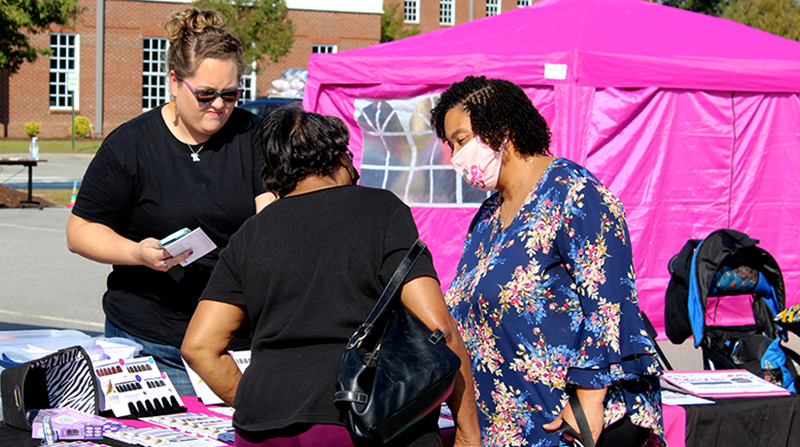 WINTON – “Silence is not the key.”

Those words were shared by Pamela Whitaker, one of the speakers at a Domestic Violence Awareness event on Oct. 23. She, and many of the other event speakers, urged people to speak up when domestic violence occurs instead of remaining quiet.

The event, hosted by the Hertford County E911 Center with assistance from Roanoke-Chowan S.A.F.E., sought to provide access to resources and encourage people to learn more about the issue. October is Domestic Violence Awareness Month. 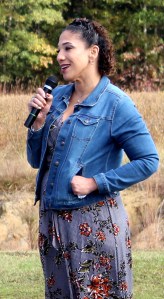 Kim Scott of the local district attorney’s office addresses the crowd at Saturday’s event held in the parking lot of the Hertford County Courthouse. Staff Photo by Holly Taylor

Whitaker is the founder of the P.A.T.H. (Pam and Tiffany Hope) Foundation, a Rocky Mount-based nonprofit for domestic violence survivors. At Saturday’s event, she spoke to the crowd to share the story of her experiences with domestic violence. Her best friend, Tiffany, had her life cut short at age 18, and Whitaker later suffered three gunshot wounds which almost ended her own life.

She said she used to be ashamed to talk about what she and her friend went through, but she eventually chose to take a stand.

“I am an overcomer and a survivor from domestic violence,” Whitaker stated.

Other survivors also spoke at the event on various topics.

Dr. Cynthia Whitaker Seabrook, a retired educator and author of “A Child’s Hidden Truth”, talked about the physical toll that abuse can have on the body.

“Those living in households riddled with domestic violence are subject to chronic fear, which affects physical health,” Seabrook explained, noting immune system issues, memory loss, fatigue, and PTSD as just a few ways the body can be affected.

She also explained how children can be affected as well, noting that a child sleeping in class might not have simply stayed up too late playing video games the night before.

“They might have been up all night listening to snapping, cursing, fighting, crying, and so that’s why they’re tired,” Seabrook said. “And it affects learning, because it affects the brain.”

Children may also consider school a refuge from what they face at home, she added, drawing from her own childhood experiences.

“Let us work together to bring victory to their lives,” Seabrook concluded on the topic of supporting victims.

Kathy Knight, who witnessed domestic violence in her family when she was a child, spoke on how to spot abusers.

“Nobody starts out wanting to date an abusive person,” Knight explained. “This is males or females. It doesn’t matter whether you’re gay, straight, young, old, any color. Any person is subjected to this nonsense. You have to be careful. You have to watch out for the signs.”

Knight explained how it can start with a partner controlling what you wear or how you spend your money. It can then escalate to isolation and physical abuse over time.

“Anybody who tries to isolate you from your family, that means they’re separating you from your natural support system,” she continued.

Knight also urged parents to watch for these signs when their children begin dating, and she emphasized that there are many resources available to help people get out of abusive situations.

In addition to survivors sharing their stories, the event also featured a speaker from the local District Attorney’s office. Like other speakers, Kim Scott stressed the importance of learning more about domestic violence and talking about ways to help people.

“We’ve got to have that conversation,” she said, noting that domestic violence often goes unreported because people don’t always know exactly what it entails.

Scott explained that the DA’s office doesn’t get involved until someone is charged with a crime, but victims suffer well before that point, which is why it’s important to stop it as early as possible.

“By the time it’s gotten to the court system, it’s already too far,” Scott concluded.

Ahoskie Police Chief Jimmy Asbell provided prayer at the beginning of Saturday’s event, and also said the department is willing to help and provide assistance to victims.

Despite the serious topic, the event also offered plenty of fun and entertainment for attendees. Held in the parking lot of the Hertford County Courthouse, a multitude of vendors and food trucks were set up to sell their wares. Kids could enjoy games and a bouncy house as well. A local singing duo and a DJ provided music.

Raffle tickets were available for purchase with all proceeds going to support Roanoke-Chowan S.A.F.E., the local organization which provides support and shelter for domestic violence victims.

This is the second event hosted by Hertford County E911 that sought to raise awareness about a serious issue. In September, they held a vigil for suicide prevention month. The goal is to host similar events in the future to bring the community together.