AULANDER – John Hubert Moore Witt, age 96, of Early Street, passed away peacefully on Saturday, October 23, 2021 at his home surrounded by his family.

John Witt was born on April 14, 1925 to John Franklin Witt and Bessie Beatrice Moore Witt in Mt. Airy, NC. He lost his mother to scarlet fever in 1929, entering foster care with the Norman Family in Dobson, NC. John always had a sense of adventure and moved to Baltimore, MD to work in the Glenn L. Martin Aircraft Company until he was old enough to join the Army Air Force and serve in World War II. After the war, John attended Wake Forest before transferring and graduating from the University of North Carolina at Chapel Hill. 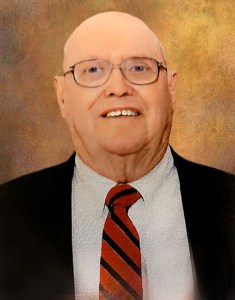 For most of his career, John served as a district representative for General Motors Acceptance Corporation which brought him to the Ahoskie area in the mid-1960s. At the local car dealership in Aulander, he found the love of his life, a beautiful smart young woman named Elaine. Together, they built a good life in Aulander and had two children, Valecia Dawn and William Bradley. John valued education, supporting his wife in getting her undergraduate and graduate degrees, and having her own career. John did the same for his daughter, Valecia, teaching her to think for herself and sending her to his alma mater and later, Duke University.

After John retired in 1984, he took advantage of this time by living out his first childhood with his son, Bradley who was just three years old. They went for long walks, spent a lot of time visiting the trash truck and firetruck, read the Wall Street Journal, and watched the Nightly Business Report on PBS. John was a member of the Aulander Baptist Church, where he taught Sunday School for a few years, volunteered for Meals on Wheels, and served as president of the local Veterans of Foreign Wars Association. Talking to people was one of John’s favorite pastimes, often turning a five-minute errand into a two-hour trip by finding someone to talk to.

John loved his family dearly and there was nothing he would not do for them. John Witt will always be a hero to his wife, daughter, and son.

Along with his parents, John was preceded in death by his brothers, Wilbur and Merrill Witt; and his sister, Harriet Rees.

A graveside service will be held on Tuesday, October 26, 2021 at 2 p.m. at the Aulander Cemetery, Aulander, NC, with Pastor Phil Terry officiating. Entombment will follow.

Garrett-Sykes Funeral Service – Ahoskie Chapel is handling the arrangements for the Witt family and online condolences can be directed to the family by visiting www.garrettsykesfs.com.