‘Best of the Best’ 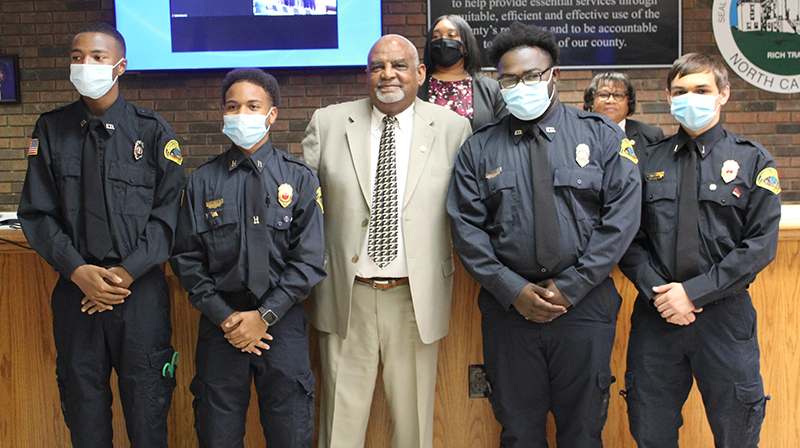 JACKSON – Young cadets from Gaston Fire-Rescue-EMS were recognized for their achievements at the regular Northampton County Board of Commissioners meeting here on Oct. 18.

Nowell explained that they competed in September at the statewide Rescue and EMS Basic Life Support competition (junior division), which was held this year in Beaufort.

“When they go into this competition, they have no idea what they’re going to face,” he said about the difficulty of the event.

But they faced the competition well and ended up rewarded for their efforts.

Team One, consisting of Harrison and Yarborough, won first place while Robinson and Lassiter’s Team Two earned a spot in third place.

“This is the first time in history these awards have been brought back to Northampton County,” Nowell announced. “They did an excellent job.”

“These four young men right here, as far as I’m concerned, represent the best of the best,” he added, explaining that he’s worked alongside them many times.

Board Chair Charles Tyner presented the four cadets with plaques recognizing their accomplishment, and said he was proud to see what they’ve done.

“Thank you for a job well done, and continue the good work,” he said.

Tyner noted that it’s not always easy to find people who want to work in the EMS field, so he was glad to see these young people take an interest. The other commissioners in attendance also expressed their appreciation for the cadets’ hard work.