Imeek Watkins returned a kick-off 100 yards for a score to break the school record for longest kick-off return; the first kick-off return for a touchdown since Antjuan Randall returned one 95 yards against Fayetteville State in 2014. Watkins also hauled in seven catches for 87 yards, part of a 233-yard receiving day for the Hawks. 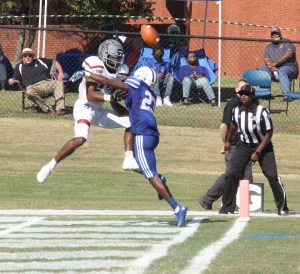 Chowan finished the contest with 366 total yards compared to a whopping 562 by the Panthers; most of those coming off the fleet feet of VUU freshman running back Jada Byers, who wound up with 213 yards on 33 carries and a pair of touchdowns.

But it was the big plays that helped doom Chowan. On the Hawks first offensive series, VUU’s Bryan Epps made a hit that caused a fumble resulting in a Panthers’ recovery. Epps had two forced fumbles and two fumble recoveries.

Later, another back-breaker came on the Hawks’ opening drive of the second half where trailing 24-21, Jaylon Boyd looked to cap a seven play drive when he appeared to cross the goal line before the ball came loose on a hit by Epps. Epps recovered for a touch back and the Panthers then drove 80 yards to take a 10-point lead, 31-21.

Finally, after Chowan recovered a fumble on their own two-yard line and was driving for what would’ve been a tie score or the lead with a touchdown and a conversion, VUU sealed the win on a sack of Witt with just under a minute to go in the game.

“We didn’t play well today,” sighed Hawks head coach Mark Hall after the game. “They took advantage of it, they have good players so they made plays.”

Virginia Union got on the board first by mounting a 10-play 88-yard opening drive and scoring a touchdown with 10:24 left in the first quarter.

Watkins’ record-setting return on the ensuing kickoff tied the game at 7-7.

It was a physical game from the outset, Chowan’s Rafiq Abdul-Wahid and Gilberto Ortiz hurried VUU quarterback Khalid Morris, who was dropped and injured on the play. Morris never returned and E’mond Caldwell came on to finish at quarterback. The Panthers were able to score to go back on top at 10-7 with a 21-yard field goal.

Chowan took their first lead on their next possession when Witt shoveled the ball to King who scored from three yards out. Jude McAtamney’s PAT kick made it 14-10, Hawks.

A couple of penalty calls aided the Panthers on their next drive and they scored on a short run by Byers to take a 17-14 lead.

Chowan took their last lead when Witt found Watkins for 25 yards before connecting with King for another first down. A pass interference and roughing the passer penalty aided the drive allowing Witt to waltz in from three yards out to lead 21-17.

An interception near the end zone when the Hawks were driving to pad their lead became instead became a 24-21 advantage for the Panthers they would never surrender when VUU’s Rodney McKay ran 98 yards for the go-ahead score. McKay’s sprint tied the Va. Union school record of the longest rush from scrimmage, equaling the record set by Fred “Cannonball” Cooper against North Carolina A&T back in 1940.

With the Panthers driving for another score before halftime, Chowan safety Connor O’Brien picked off a pass in the endzone preserving the Hawks’ three-point deficit at the break.

VUU scored the only touchdown of the third quarter to lead by 10, 31-21, then extended it to a 17-point leg up with their sixth score of the game.

McAtamney’s 32-yard field goal started the Chowan comeback, getting the Hawks within two touchdowns, 38-24. After what was just a two-yard punt leaving the Hawks at the VUU 33-yard line, Witt made it a one-score game six plays later, drawing his team to within 38-31.

The Panthers tried to counter, but fumbled in the shadow of the Chowan goal post at the two-yard line. The Hawks recovered but only went 33 yards before the final sack of Witt pretty much ended the game as VUU ran out the clock in the final minute of the contest.

“Back-to-back losses aren’t easy to deal with, but we all put our heart and soul on the line,” said a disappointed Witt afterward. “We just gotta come back Monday ready to work.”

“We don’t focus on (one game’s) result, or you live on an emotional roller-coaster,” added Hall. “We just have to focus on finishing 8-2 and Elizabeth City next week. We’ve had a little adversity and now we need to overcome it.”

After a three-game home stand, the Hawks hit the road for their next two contests, beginning Saturday at 1:30 p.m. at Roebuck Stadium against Elizabeth City State. 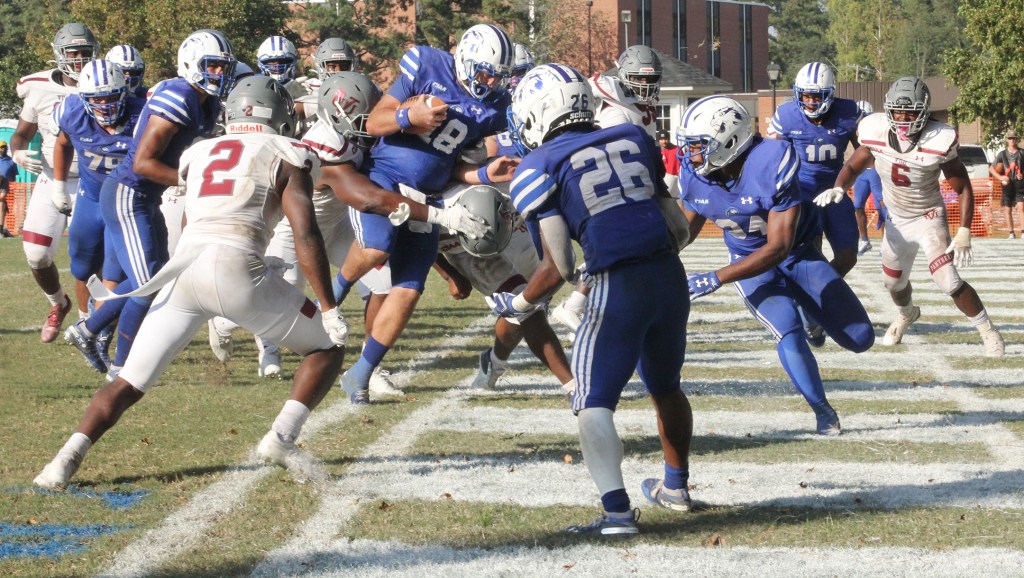 Chowan quarterback Bryce Witt (center) scores on a short run in the fourth quarter, drawing his team to within a touchdown, but the Hawks fell 38-31 against Virginia Union. Staff Photo by Cal Bryant