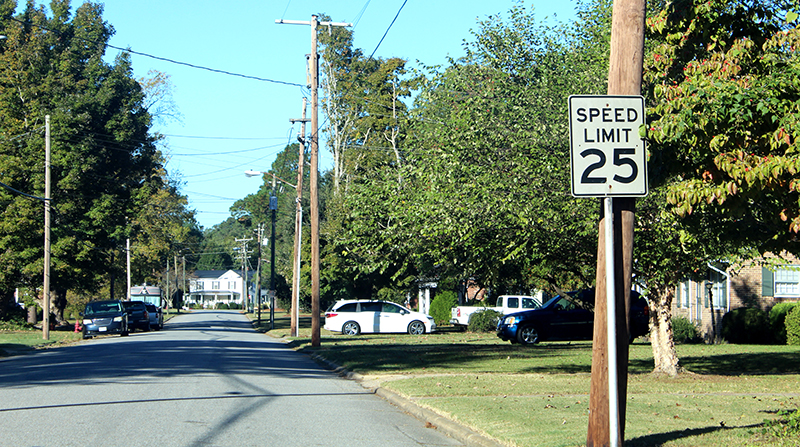 As shown in this photo, the speed limit is posted at 25 mph along the entirety of High Street in Murfreesboro. Some residents living along this busy street complained last week to the Murfreesboro Town Council regarding speeding and reckless driving by motorists. Staff Photo by Holly Taylor

MURFREESBORO – Residents of High Street in Murfreesboro say people have been using their road as a high-speed shortcut through town for years, and it’s become a safety issue that needs to be addressed.

Michael Saner, one of those residents, represented a group of his neighbors as he spoke before Town Council at their regular meeting here on Oct. 13.

“High Street is the easiest way to cut through town without ever having to stop,” Saner explained, noting the exception of one stoplight at the intersection with Union Street. “It is the longest continuous stretch of residential road in all of Murfreesboro.”

Most of the concerned citizens at Wednesday’s meeting said they resided on West High Street.

Saner explained that they’ve witnessed speeders hitting telephone poles, totaling parked vehicles, knocking off side mirrors, recklessly passing vehicles in the road, and nearly hitting pedestrians. That behavior has them concerned, not only for themselves, but for the children in the neighborhood.

“They’re getting to the age where they’re gonna want to start crossing the street, and that road is very, very unsafe,” Saner said, referencing the children.

Saner said that officers from the Murfreesboro Police Department had been patrolling the road frequently to try to stop speeders, and he thanked them for their work but acknowledged that their presence alone couldn’t fix the problem.

“What we would like the Town Council to do is approve for the funding to have, at a minimum, the parking lane repainted,” he said, noting that it had been many years since any of the lines had been repainted on High Street.

Saner presented information to the council for traffic striping paint that cost $150 per gallon, estimating a total of about $6,000. He did not, however, calculate the cost of labor, surveying, or any other costs a repainting project would incur. But he also added that High Street has the largest amount of tax paying parcels in town, meaning that Murfreesboro collects a great deal of tax money each year that he said could be used to address the speeding problem.

In addition to the repainting suggestion, Saner also suggested adding speed bumps and more signage, including perhaps a few more stop signs as a deterrent for speeders.

“We’re highly concerned for our kids, and you’re the only way that it’s going to get solved,” he concluded.

Other residents of High Street spoke up after Saner’s presentation, sharing their personal experiences with reckless drivers on the road. One woman said she had made her own homemade “children at play” sign to put in her yard when her children are outside, but some drivers see the sign and purposely speed up, she claimed.

They all agreed the problem was a community issue that needs to be solved by everyone working together.

Several council members spoke following the presentation to agree with the citizen’s concerns, noting that they have witnessed the problem firsthand as well. Council member Berna Stephens explained that she lives on East High Street, and there is a speeding problem on that end of the road as well.

Murfreesboro Police Chief David Griffith reported that in one day, the department had performed 75 traffic stops on High Street. He suggested adding “no passing” signs to make it easier for the police to not only enforce speed limit violations, but passing violations as well.

Mayor Hal Thomas recalled that the council had been told six years ago that new paint wouldn’t stick to the road because it was so worn, but he expressed skepticism with that excuse. He said the problem would be addressed, though he did not have an estimate on how soon.

“It’s obvious that this needs to be addressed,” said Council member Jay Revelle. “And no one thing can solve it.”

Revelle suggested forming a committee to study the suggestions and see what would work best, and the council agreed.

At the end of the discussion the citizens thanked the council for taking their concerns seriously.