The Bears improved to 5-2 overall and 3-1 inside the Northeastern Coastal Conference with the win. 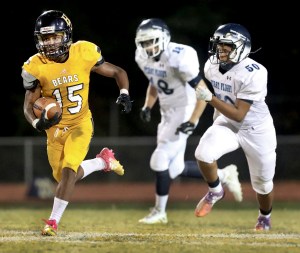 First Flight had a good drive going on their next possession, marching to the Bears 32 yardline in nine plays. But the Nighthawks lost the handle on the football at that point and Jayden Daniel pounced on the loose pigskin.

Aided by a key 16-yard scamper by Rodgers on a fourth down play, the Bears proceeded to march 68 yards in 12 plays capped by Elijah Winley’s amazing catch of a 31-yard TD pass, between a pair of First Flight defenders, from Rodgers for a 12-0 lead with 1:39 left in the opening quarter.

A little over one minute later, HCHS defensive lineman Trequan Taylor recovered a First Flight fumble at the Bears 25 yardline. Five plays later, Rodgers spotted Chorii Woods running free over the middle and the two hooked up on a 52-yard touchdown pass. Rodgers added the conversion run, increasing the Bears lead to 20-0 on the second snap of the second quarter.

Powell, a two-way starter, picked off a First Flight pass on the game’s next snap. That set-up the Bears at midfield and they used back-to-back completions by Rodgers (14 yards to Bryant Williams and 12 yards to Jahaun Bond) to move quickly downfield. The five-play drive ended with a three-yard touchdown run by Tyree Coatney that, coupled with the conversion run by Rodgers, padded the HCHS lead to 28-0 at the 9:57 mark of the second quarter.

Five plays later, Powell notched another interception, returning this theft 61 yards to paydirt. Rodgers connected with Williams on the conversion pass, extending the Bears lead to 36-0 with just under seven minutes to play until halftime.

First Flight punted away their next possession, with the Bears taking over at their own 27 yardline. On first down from that point, Rodgers and Bond connected on a 49-yard pass play to the Nighthawks 16 yardline. Four plays later, Rodgers called his own number and scored on a one-yard run, staking the Bears to a 42-0 halftime lead.

Highlighted by four runs totaling 25 yards by Sean Cruz, three runs by Coatney covering 20 yards, and a 14-yard pass from Rodgers to Woods, the Bears took the opening possession of the third quarter and marched 65 yards in 12 plays, capped by a one-yard touchdown scamper around the right side by Colin Brock for a 48-0 lead.

Two snaps later, HCHS defensive lineman Dominique Simmons pounced on a First Flight fumble at the Nighthawks 21 yardline. That set-up a short drive capped by a four-yard touchdown run by Desmond Perry for a 54-0 lead with 7:02 left in the game.

The game’s final two points came on a safety after the Nighthawks, following a high snap over the quarterback’s head, was kicked through and out of the back of the endzone.

For the game, Hertford County amassed 469 yards of total offense. Rodgers led that effort, completing 13-of-15 passes for 222 yards and three touchdowns. He also added 35 rushing yards and one score. Cruz was the game’s leading rusher, running for 87 yards on 14 carries. Coatney added 44 rushing yards on six attempts.

The Hertford County defense limited First Flight to 78 total yards, 77 of which came through the air.

HCHS travels to Camden County for a conference outing on Friday, Oct. 15.