A native of Roxobel, NC, John was born on August 7, 1945, the middle child and only son of John Edward (Jack) Tyler II and Margaret Long Tyler. Those who knew Jack and Margaret are not surprised that their son was a truly unique individual, in all the best ways. 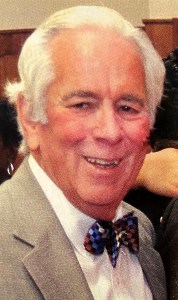 John attended Bertie County Schools through the 9th grade, when he left for Christ School in Arden, NC, where he graduated in 1963. He enrolled in the University of North Carolina at Chapel Hill, and shortly thereafter his education became somewhat circuitous or as he called it, “well-traveled.” After a stint in the U.S. Army in Germany, he returned to Chowan University and later graduated in 1972 from Campbell University in Buies Creek, NC.

There was never any doubt that Bertie County was home, and John returned to serve as a magistrate while helping with the family farm and antique business. On August 17, 1974, he married Marjorie McDonald (Marti) Neblett of Knoxville, TN and brought her back to Roxobel, where son Rutland was born in 1977 and daughter Marjorie in 1980.

He was appointed Clerk of Superior Court by Superior Court Judge Richard Allsbrook in 1984 and elected to a full term the following year. He had opponents run against him twice, but after that he ran unopposed until his retirement 29 years later. Known as “Bow-Tie Man” at the courthouse, John was the go-to person for anyone with questions, yet, typically, when he retired he credited all those he worked with and the people of Bertie County for his success.

John’s service to Bertie County went far beyond his profession. He served as town commissioner of Roxobel and on the Vestries of St. Mark’s Episcopal Church in Roxobel and St. Thomas Episcopal Church in Windsor, where he was twice Senior Warden. In addition, he was board member and president of the Bertie County YMCA and the Historic Hope Foundation. He also served on the Bertie Rural Health Board for many years. In 2014, the Governor presented John with the state’s highest award, the Order of the Long Leaf Pine.

Appreciating others was fundamental to who he was, but only one aspect of the man who epitomized all the positive traits of the classic Southern gentleman: charming, respectful, honest, generous, thoughtful and entertaining. He always greeted everyone warmly, and you always felt better after a visit from John.

A lifelong Tar Heel and true fan, friends often received a call following a game for a debrief. However, everyone knew (or learned quickly) not to check-in with John during a game – it might negatively affect the results. His pride that both Rutland and Marjorie graduated from Carolina was only surpassed by his pride in the kind of people they grew up to be.

Family was everything to Toby. Nothing meant more to him than spending time with his children and grandchildren, and he got special pleasure from watching them performing or competing in a sport. A portrait of his beloved grandfather Ernest Rudolph Tyler hung in his courthouse office, and he often regaled others with memorable stories of his parents and extended family – as well as a bountiful number of self-deprecating tales of his youth. As a result, untold numbers of friends consider themselves family.

Thanks to modern medicine, an indefatigable spirit, and a loving wife who knew CPR, John survived three major heart procedures and two cardiac arrests after his first heart attack, enabling him to live another 22 years. We are all better for the time we had with him.

In addition to his parents, John was predeceased by his sister Ridley Tyler Smith.

A generous and loving soul, John Cotten Pierce Tyler had a love of life and true understanding of what was important. He gave meaning to the words son, husband, father, grandfather and friend.

A memorial will be held Thursday, October 14, 2021 at 4 p.m. on the grounds of St. Thomas Episcopal Church, Windsor, NC immediately followed by a reception.