AHOSKIE – The final numbers from the 2020 Census will lead to the Town of Ahoskie redrawing its two municipal voting districts.

The town was informed four months ago that its municipal election would be delayed until March of next year should it need to correct any population imbalances within its two voting districts (Ward A and Ward B), based on the new numbers from the U.S. Census.

The election for municipal offices, now set for March 8, 2022, was originally scheduled for Nov. 2. 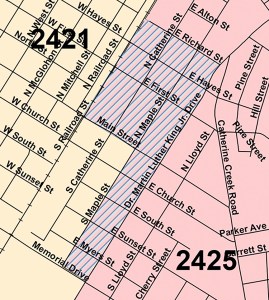 The purple-striped areas on this map represent the town blocks that are proposed to be moved from Ward A to Ward B.

“After the 2020 census, we had to look at the number of people now living in Ward A and Ward B and make sure we have the same number of people, within 10 percent, living in each district,” Ahoskie Town Manager Kerry McDuffie told Town Council members at their Sept. 28 meeting. “We are required by federal law to do that because our citizens are guaranteed equal rights for representation on the town council.

“Once we got our numbers from the 2020 Census, they showed 13.6 percent more people living in Ward A than Ward B. Therefore, we have to move the district lines between the two Wards,” McDuffie added.

The town hired a Wilson-based law firm and a GIS mapping firm to assist the town in the redistricting process.

McDuffie presented Council with two options of moving streets from Ward A to Ward B in an effort to balance the voter representation.

“We can use streets as a boundary, as a dividing line, but we are prohibited from cutting blocks in half; meaning one-half of one block can’t be in one voting district while the other half of the block is in another,” McDuffie explained.

He added that the final decision on locating the boundaries is in the Council’s hands.

“We have all the details of what the Census said, to include the number of people living on each block in town,” McDuffie said. “You can use that information to draw the lines anyway you like, but I want to point out that example map #2 is drawn in a way that has it within four people of an exact equally populated district. That’s about as equal as we can get it.”

McDuffie said if example map #2 was approved, Ward A will be comprised of 2,421 citizens while Ward B will have a population of 2,425.

Example map #2 proposes to move 14 blocks currently in Ward A to Ward B as follows:

The Council will hold a public hearing at its next regularly scheduled meeting (6 p.m. on Tuesday, Oct. 12) for the purpose of receiving comment on the proposed changes to the boundaries between Ward A and Ward B.

At last week’s meeting, the Council did approve a resolution that they intend to consider an ordinance that amends Article III of the town’s Charter, one that specifically deals with the election of the Mayor and Council.

As far as to what precise changes will be made to the boundary lines between the two Wards, as defined in the ordinance, the Council must vote on that within 60 days of the public hearing.

Legislation delaying municipal elections for offices elected by district until 2022 became law on June 28. Under Session Law 2021-56, more than 30 municipalities across North Carolina, including Ahoskie, will delay elections originally scheduled for November.

“The delay in the election from November 2021 to March 8, 2022 gives us time to handle this redistricting,” McDuffie said.

Ahoskie Council seats currently held by Charles Freeman (Ward A), Roy Sharpe (Ward B), and Jamie Burns (At Large) will be on the March 8, 2022 ballot. Under the new law, terms of mayors and council members in the affected municipalities will be extended until they or their successors are elected in 2022.

Candidate filing periods for the delayed elections will be held either in December 2021 or January 2022, depending on when each municipality completes the redrawing of its districts.