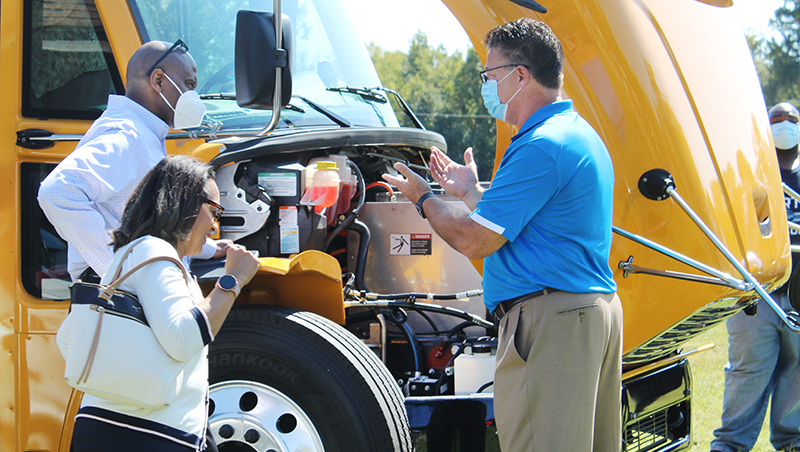 The event, held outdoors at the Ahoskie Creek Amphitheater on Friday, Oct. 1, provided the public an opportunity to see the latest innovations in technology and learn more about what’s available locally.

“We’re in a very historic time now where there’s this transition toward a clean energy future,” explained Marshall Cherry, REC’s Chief Operating Officer. “These types of investments will really bring a lot of benefits to regions like the Roanoke-Chowan area.”

Those investments include providing energy efficiency services for REC member-owners, such as the Upgrade to Save program, “smart” thermostats, hot water heater controls, or even solar power.

“These types of investments actually allow us to deliver our service at a cheaper level when we can be a little more efficient in the way we utilize the grid,” Cherry continued. “The more we can do that, we can pass on cheaper costs. But at the same time we’re finding ways to really preserve Mother Earth.”

Many of REC’s services work by having internet access at home. Roanoke Connect is another initiative by the energy cooperative to help provide broadband internet service to the local area.

“We’re trying to get to as many homes as we can,” said Melissa Smith, REC Coordinator for Broadband Services. “We offer a range of plans.”

Smith was stationed along with some of her coworkers at one of several information tents at the event. Attendees could stop by to ask questions about the program, see examples of what equipment is provided, and learn how to sign up.

“We’re really excited to be able to be a part of the event,” Smith added.

But perhaps what garnered the most excitement of the event were the electric vehicles on display. There were several electric-powered cars that people were able to climb into and explore their features, as well as an electric-powered bus.

The school bus on display was provided by Thomas Built Buses. Mark Childers, a representative from the company, said they’d already delivered 96 electric buses throughout the country and they hoped to be able to deliver some to school districts in the Roanoke-Chowan area soon.

Childers took a few minutes to give a short tour of the 77-passenger bus’s features. He explained that all the internal combustion components have been removed and replaced with high voltage components, but he emphasized that the location of the high voltage cables will maintain student safety.

The bus runs on two DC-charge battery packs, and the charging port is located just behind the bus door.

“It’s a very efficient vehicle,” Childers said, noting that a diesel bus averages around seven miles per gallon while an electric bus’s efficiency is equivalent to around 22 to 24 miles per gallon.

Daryl Williams, Director of Murfreesboro’s Chamber of Commerce, was one of the attendees of Friday’s event, citing the opportunity to learn more about electric vehicles as what drew him to come check it out.

“This is a great event. A lot of people are starting to realize that electric vehicles are coming. We might as well get ready for it,” Williams explained. “Roanoke Electric is known for being very proactive with electric vehicles.”

The Murfreesboro Chamber is continuing to work towards their goal of putting an EV charging station within the town, and Williams said REC has been helpful in providing assistance on that ongoing project.

“We’re looking at it from an economic standpoint,” Williams said, hoping that a charging station would draw more people to visit the town while giving their car an electric ‘fill up.’

“Clean energy is absolutely fantastic, and I’m all for that,” he added.

In remarks during the expo event, REC President and CEO Curtis Wynn emphasized the importance of utilizing different energy solutions to reduce costs and electricity consumption for the cooperative’s member-owners.

“Those pocketbook issues create burdens for our families, and that’s something we’re trying to help alleviate,” he said. “Cost containment for the cooperative is also important, making sure we keep our costs down so that we can maintain our rates. And on top of all that, we want to be good stewards of the environment.”

“Today is just a way to celebrate,” Wynn concluded as he urged everyone at the event to explore the energy initiatives and innovations on display.