MURFREESBORO – One blocked punt away.

That was the difference from Chowan University hanging the worst football loss ever on Winston-Salem State University (WSSU) as the Hawks ran their record to 5-0 overall and 2-0 in Central Intercollegiate Athletic Association (CIAA) play with a 73-7 win here Saturday on ‘Black Out Night’ at Garrison Stadium.

The Rams blocked freshman punter Luis Orellana punt – only his second of the game – at the Chowan 12-yard line, scooped up the pigskin at the 5 and ran in for a touchdown in what was WSSU’s only score of the game following the point-after. That play avoided the Rams’ worst loss ever in school history eclipsed only by a 70-0 shutout to Virginia State in 1944. 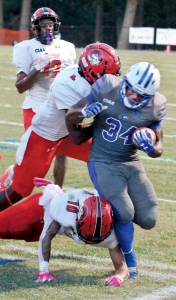 Chowan’s Jaylon Boyd powers into the endzone for the first of his two rushing touchdowns on Saturday night where the Hawks manhandled Winston-Salem State, 73-7. Staff Photo by Cal Bryant

Scoring on their first four possessions, Chowan led 28-0 by the close of the first quarter and put the Rams in a hole from which they never recovered.

Interestingly, it was seven years ago (2014) that WSSU came to Murfreesboro and left as 77-30 victors. The 2021 game marked the Rams’ first trip back to Garrison since that debacle; and that year also marked current head coach Mark Hall’s seventh season as offensive coordinator.

“No, I didn’t use that score for motivation,” remarked a smiling Hall after the game. “We’ve just got a great group of players and a great group of coaches who’ve bought into what we’re trying to do here. We had a plan back in 2019, everyone’s bought into it, and we’re now starting to reap the benefits.”

“We’re just trying to get better every day,” said redshirt freshman defensive lineman Isaac Anderson, who finished with one-and-a-half sacks for a team-leading six on the season. “I got a lot of good moves in my arsenal and if I don’t take plays off and do my job then the sacks just come right into my hands.”

Chowan scored their first 10 drives and on 11 of 13 possessions in the game. Their first score came when quarterback Bryce Witt found Laurence King for the first of five passing touchdowns. King was leading receiver with nine catches and 126 yards, his third 100-yard receiving game.

As for Witt, he scored a total of eight touchdowns for the evening. The Sutherland, VA senior threw for 423 yards and rushed for 48 more, to include a trio of TD runs.

“We have a motto called ‘Rough-Side’ because that’s where we feel we’re from,” Witt added. “We don’t have some of the things other programs do, so we just make it with what we’ve got and use hard work and that blue-collar mentality to keep this unit going.”

Following that initial score Witt ran for two more scores and passed to Malik Tobias for another, giving the Hawks four touchdowns and a 28-0 lead after just the first quarter.

Tobias was targeted nine time, finished with six catches and three scores, including hauling in a 39-yard third quarter strike from Witt – the longest pass connection of the game.

“Nothing special in the game plan, just a great play call by Coach Hall,” noted Tobias. “This was my first-ever three touchdown night and it just made me hungry to get to work for the next one. There’s just a whole lot of trust among this team.”

Jaylon Boyd opened the Chowan scoring in the second quarter en route to a two-score 101-yard rushing night on 12 touches to help the Hawks open a 49-0 halftime lead. He closed the scoring for the night with a 10-yard run that put the Hawks over the 70-point mark.

“Gotta credit my O-line, man,” Boyd said afterward. “They made the holes and I just hit ‘em. Once you smack people in the mouth so many times they just don’t want to tackle you. Whether it’s the run game, the passing game, offense or defense, we feed off each other and then we respond.” 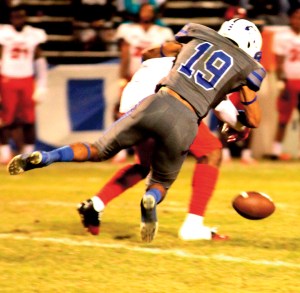 Defensive back Simeon Burns jars the ball loose from a Winston-Salem State receiver. The Chowan defense did not surrender a touchdown while limiting the visiting Rams to 131 yards of total offense. Staff Photo by Cal Bryant

This win marked the first time the team was 5-0 since the school’s 1980 junior college days as the Braves, coached by the legendary Jim Garrison, and when they were in the old Coastal Conference.

Next up for Chowan will be a showdown on Saturday Oct. 9 with nationally-ranked and perennial CIAA North Division power Bowie State of Maryland in a 1 p.m. clash which could decide divisional and conference supremacy.

“We want to show them that we’re different,” said Anderson. “They’ve got the publicity and they probably think we’re the same old Chowan. When they see us this time they’re going to know what’s up.”

“We’ve got to have great energy and great effort and let that be what drives us,” added Hall. “Right now we’re clicking and that’s a good thing.”