MURFREESBORO – Chowan University seeks to continue its winning streak when the Hawks played host to Winston-Salem State in a CIAA football game on Saturday (Oct. 2) at Garrison Stadium

Kick-off is set for 6 p.m. and the contest is “Black Out” night sponsored by Chowan SGA. Fans are encouraged to wear black clothing.

It will be Winston-Salem State’s first visit to Garrison Stadium since the 2014 season, a game won by the Rams, 77-30.

The Hawks continue to lead the CIAA this year with 46.0 points per game while allowing 23.3.

The defense leads the CIAA with 19.0 sacks led by Isaac Anderson and Rafiq Abdul-Wahid with 4.5 sacks each. Gilberto Ortiz has 3.5 sacks this season.

Chowan senior quarterback Bryce Witt leads the CIAA in yards per game at 287.5 and 15 touchdowns. Witt was named CIAA Quarterback of the Week for the second straight week. 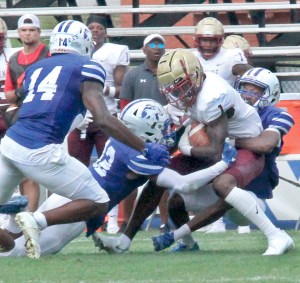 The Chowan defense wraps up an Erskine runner during the Hawks home opener on Sept. 18. Chowan returns to Garrison Stadium on Saturday night when they host CIAA foe Winston-Salem State in a 6 p.m. game. Staff Photo by Cal Bryant

Laurence King, second in the CIAA in receiving yards per game (111.3) and Imeek Watkins, fourth in the CIAA (70.0), both lead the CIAA in touchdown receptions with six.

Witt continues to shred the Chowan record book with his 105 total touchdowns. Witt has 22 rushing touchdowns in his career and is two shy of tying former running back Tyree Lee (24) of the all-time mark. Witt is closing in on 8000 career passing yards

Abdul-Wahid will look to put his name at the top of the all-time sack list, currently with 17.0 sacks. He needs 2.5 more sacks to tie Nate Wyche for the lead.

Winston-Salem State enters with a 0-3 overall record and a 0-1 record in the CIAA. The Rams are coming off a 19-14 loss to Elizabeth City State last weekend at home.

The Rams rank 10th in the CIAA at 11.0 points per game, but fourth in the league at allowing 22.3 points. WSSU’s defense is the strong point so far this season posting the third best defense (one spot in front of the Hawks) allowing 281.3 yards per game.

Cameron Lewis and Dominique Graves have split time at the quarterback position. Both seem to locate Antjuan Collins who has for 15 receptions for 142 yards this season.

Last week in Raleigh, the Hawks started slow with a 14-12 lead at the end of the first quarter before posting 45 unanswered points to cruise to a 59-12 victory over St. Augustine’s to start CIAA play.

The Chowan defense posted nine sacks and limited the Falcons to 169 yards of total offense. More than one-half of that yardage came on a 92-yard touchdown pass.

Anderson notched two sacks in that game. Ortiz and Jamae Blank posted 1.5 sacks. J’Vin Farmer had an interception and a fumble recovery.

In addition to Witt, the CIAA also honored Tyrek McNeil as the Offensive Back of the Week after he rushed for 179 yards on 19 carries in last week’s win at St. Augustine’s. Also, Bryson Gibson was named as Offensive Lineman of the Week as he anchored Chowan’s “front wall” that paved the way for the team to score a season-high 59 points as well as 550 yards of total offense, that included 310 yards rushing.