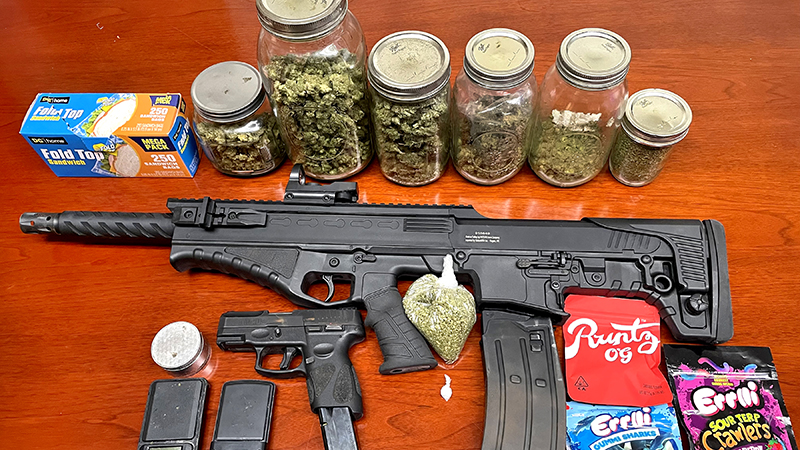 Marijuana, cocaine, drug paraphernalia, and two weapons were found inside a Garysburg residence after a search warrant was served on Wednesday. Photo by Northampton Sheriff’s Office

GARYSBURG – An attempt to locate a juvenile with a custody order resulted in the arrest of an adult here Wednesday on drug charges.

He was jailed under a $4,000 bond and has since been freed on bond pending an appearance on Dec. 16 in Northampton County Criminal District Court.

According to Captain C.A. Parker of the Northampton County Sheriff’s Narcotics Division, agents – with the assistance from the Garysburg Police Department – went to a residence in the 300 block of Highway 186 in Garysburg shortly before 1 p.m. on Sept. 29 to locate a juvenile who had a secure custody order.

“Upon approaching the residence and making contact with the occupant of the residence, agents could smell a strong odor of marijuana emitting from the residence,” Parker stated. “Agent R.T. applied for and was granted a search warrant.”

Upon serving the warrant, Parker said a search of the residence resulted in agents locating and seizing 422 grams of marijuana, cocaine, digital scales and box of sandwich baggies.

Agents also found two firearms, a shotgun and a 9mm Taurus handgun. Parker said those weapons were registered to Brewer and were seized as part of the drug arrest.