CHAPEL HILL – Carl Dewey Taylor, a man of uncommon kindness and a consummate Tar Heel, died suddenly on Friday, September 24, 2021 at his home in Chapel Hill. Born in Gatesville, NC on June 18, 1945, Carl was the third son of Daisy Greene Taylor and James Edward Taylor.

The first in his family to attend college, Carl sent himself to pharmacy school at UNC-Chapel Hill, where he played on the freshman baseball team and graduated in 1968. At his side, where she remained until her death in 2010, was his wife Carolyn Harrell Taylor, whom he married on December 19, 1964. Son Chip was born in 1967. They moved to Ahoskie, NC in 1968, where Carl began his career at Roanoke Chowan Hospital, a place he continued to serve until his death. The arrival of daughter Cathryn in 1971 completed the family. 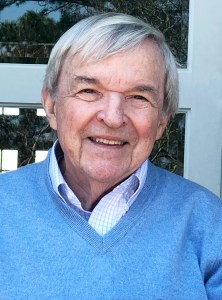 Carl founded Carl D. Taylor Pharmacy, Inc. in 1979 and owned and operated two independent pharmacies in Gatesville and Ahoskie for more than 20 years. A committed community leader, Carl served on a myriad of boards, including the Hertford County School Board, the St. Thomas Episcopal Church Vestry, and the Roanoke Chowan Hospital Board. He led the hospital board in forging an alliance with Pitt Memorial Hospital (now University Health Systems), serving all of eastern North Carolina. He continued to serve on the Roanoke Chowan Alliance and was a founding member of the Roanoke Chowan Foundation, creating a vision for a model medical wellness center for northeastern North Carolina, with 30% of the memberships reserved for those who were indigent.

In 2001, Carl and Carolyn moved back to Chapel Hill, where Carl became the Director of Pharmacy Services at Piedmont Health Services, Inc., a position he held until his death. From 2007-2012, he also served as Piedmont Health’s Director of Community Relations/Business Development. Piedmont Health is a federally qualified health center operating six sites with pharmacies, and it provided Carl the opportunity to do what he believed in most – provision of equal access to outstanding healthcare to all.

Carl’s extensive knowledge, dedication and experience made him a sought-after consultant by other Community Health Centers throughout the country as well as a speaker at area, state and national meetings in the areas of formulary development and management of community health centers, including the impact of pharmacy centers and Medicare Part D.

He received numerous recognitions, including the North Carolina Hospital Association’s Trustee of the Year Award in 2000, but the award that most exemplifies the way Carl lived his life was an award he received in 1999. Carl was one of the first to be awarded Hertford County’s Dr. Martin Luther King, Jr. Continue the Dream Award in recognition of those whose community and life activities demonstrate a continuing pursuit of a more just society.

Carl gave full credit to UNC-Chapel Hill for helping him develop into the man he came to be. He would say, “I see every day how my life was changed by attending the University.” Like Charles Kuralt, he believed it is “the University of the people,” and as a result, he gave back to Carolina in many ways. In addition to being founder and chair of the Roanoke Chowan UNC Alumni Club, he served on the UNC Board of Visitors, the General Alumni Association Board of Directors and the Advisory Board of the Carolina Center for Public Service. Always wanting to support young people in receiving the education provided to him, he served as a clinical assistant professor in the Eshelman School of Pharmacy, preparing pharmacy students for real world practice. In addition, he served on the Hertford County selection committee for the Morehead-Cain Scholarship and counseled and advocated for an untold number of Gates and Hertford County youth considering college.

A season ticket holder for Carolina football, baseball and men’s and women’s basketball, Carl not only attended the games, but could also be found on a regular basis shooting hoops and playing pickup ball in Woolen gym until his knees began to let him down. However, that did not stop him from upping his time at Finley golf course, an enduring pastime.

If asked about what Carl was known for, many friends immediately talk about his cooking. He often cooked for his colleagues at Piedmont – some say that the Friday morning meetings were well attended not so much for their content, but for the cheese grits and Carolina sausage Carl provided. His fried chicken was outstanding and his fudge legendary.

Carl loved concerts and theater and wanted others to share his cultural appreciation. As Les Misérables was his favorite performance, he once took his staff from Ahoskie and Gatesville to see the musical in Norfolk. The message of human dignity and resilience resonated with him, and he wanted his employees to understand how important those characteristics were. He always wanted to expand the horizons of those around him, whether listening to NPR, classical music or theater soundtracks. In the same way, friends often received an invitation to join him in an evening out, usually enjoying dinner and the company at Kitchen or Glasshalfull.

Carl’s love of learning motivated him to take every opportunity to gain more knowledge and understanding, both professionally and personally. An avid reader of books and newspapers, he kept up with current events and could often be found attending lectures or discussing the latest news with friends and colleagues.

However, nothing was as important or enjoyed as much as spending time with his family. He was incredibly proud of the people Chip and Cathryn grew up to be. He adored (and was adored by) his three grandchildren, Anna Cathryn, Charles and Eliza, reading to them, teaching proper ball handling and shooting techniques and reveling in their activities and accomplishments.

Carl Taylor will be remembered as a loving husband, father and grandfather; dedicated pharmacist; exceptional cook; gracious host; outstanding gardener; lifelong learner; committed advocate for equal access to education and healthcare; fervent fan; and generous friend who lived by his favorite Dean Smith quote: “You should just do the right thing.” He was truly, in Carolina parlance, “a priceless gem,” and he will be missed.

Services will be held at the Chapel of the Cross in Chapel Hill on Thursday, October 28 at 1 p.m., immediately followed by a local reception. In lieu of flowers, donations may be made to Friends of Piedmont, the Juvenile Diabetes Research Foundation or the Interfaith Council of Chapel Hill. Correspondence to the family can be addressed to Ms. Cathryn Perry or Mr. Chip Taylor, PMB 141, Virginia Beach, VA  23451.