AHOSKIE – After months of debate, professional opinion, and even more discussion, the Ahoskie Town Council has finally decided to stand pat on a decision they reached back in April.

At their meeting here Tuesday evening, Council members opted to deny proposed amendments to an ordinance they approved on April 13 that regulates the construction and use of a helistop/helipad.

The town needed to add a section to its Code of Ordinance (Chapter 14 – Buildings and Building Regulations) after officials with Vidant Roanoke-Chowan Hospital made their intentions known regarding a plan to establish a helistop/helipad on property owned by the hospital. 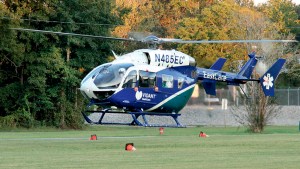 One of the Vidant EastCare helicopters makes a landing at the Ahoskie Creek Recreational Complex in October of last year as part of a “National Night Out” event hosted by local emergency responders. Plans are currently in the works to construct a helipad in Ahoskie adjacent to Vidant Roanoke-Chowan Hospital. File Photo by Cal Bryant

Those plans set off a long – and sometimes contentious – debate between the parties involved, including the Ahoskie Planning Board. The latter was asked by the Council in May to re-address some of the language in the ordinance.

Meanwhile, Vidant RCH brought in an engineering/architectural firm specializing in healthcare and industrial site design to present the details of their plans, which included placing the helipad in what is now a physicians parking lot located off West Memorial Drive. Town officials also solicited professional opinion by hiring an aviation facility design expert to study the hospital’s helipad plans.

Now, after all that maneuvering, Town Council members voted unanimously to follow the ordinance’s language as approved on April 13, which basically allows a helistop/helipad as an accessory use for a hospital with an emergency room to serve the public.

The only major difference to what was approved back in April and an amendment suggested by the Planning Board is wording about a sound barrier wall that is proposed in an effort to reduce the level of noise made by a helicopter in the general area of the helipad. The amendment said the wall is “required” while the original wording referenced the wall as “recommended.”

It was noted at Tuesday’s meeting that a sound barrier is not necessarily a physical structure. It could, by definition, be a natural barrier.

Both the original ordinance and the one tweaked by the Planning Board call for fencing around landing pad or surfaces shall be set back a minimum of 75 feet from residential property lines with a Heliport Protection Zone of no less than 185 feet at ground level.

Operation of the helipad is required to meet all standards and requirements imposed by the Federal Aviation Administration (FAA) and other federal, state, and local requirements. Additionally, FAA standards for design of helicopter landing pads and pavement grades shall be met for site development.

The landing area shall be of a material free of dust and loose particles which may be blown by the helicopter. Lighting is also to be provided.

Proper distance from the easements for high voltage transmission lines shall be maintained.

The helipad site shall be surrounded by a fence or other barrier which prohibits access except at a controlled access point.

The location of a helipad at Vidant RCH will speed up the process of airlifting critical care patients to Vidant Medical Center in Greenville. Currently, when a medical helicopter is summoned to Ahoskie, that aircraft lands on the front lawn of Hertford County High School, which is the designated landing area. From there, the flight crew, who are paramedics, are taken to Vidant RCH by Hertford County EMS. That crew accepts the patient and all are taken back to the landing zone at the high school. That process could take 45 minutes or more.

Bolden sentenced to 5+ years behind bars