GARYSBURG – A search for a fugitive in a local motel ended with a Northampton County woman placed under arrest on several drug related charges.

Prater was given a $1,000 bond and is scheduled to appear in court on Sept. 29 to answer the charges. 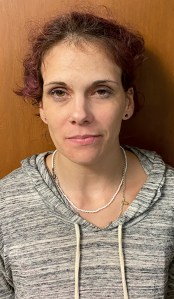 Captain C.A. Parker of the Northampton County Sheriff’s Office Narcotics Division said the arrest stemmed from a tip that an individual wanted on numerous felony warrants was a guest at the Super 8 Motel located off I-95 near Garysburg. Northampton Narcotics Division agents were assisted by the Gaston Police Department, Halifax County Sheriff’s Office, and Roanoke Rapids Police Department in an attempt to locate the fugitive.

Parker stated that upon approaching the room where the fugitive was reported located, agents came in contact with a female later identified as Jennifer Prater.

“While speaking with Prater, agents could smell a strong odor of marijuana coming from inside the motel room, and the agents also saw drug paraphernalia in plain view,” Parker said.

During a subsequent search of the room, Parker said agents located and seized a user amount of cocaine, methamphetamine, and drug paraphernalia, which included a glass smoking pipe, straws with white residue and syringes.