Junior running back Sean Cruz rushed for a game and career-high 167 yards and three touchdowns; sophomore quarterback Keveon Rodgers had his hand in four scores; and an aggressive Hertford County defense smothered Pasquotank to the tune of minus 37 total yards as the Bears blanked the visiting Panthers, 48-0, here Friday night. 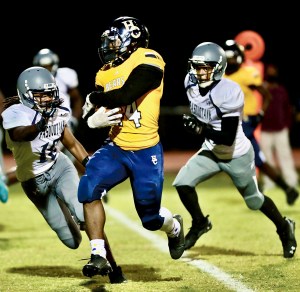 Sean Cruz runs past a pair of Pasquotank defenders for part of his game and career high 167 rushing yards that helped Hertford County in its 48-0 home win on Friday night. Photo by William Anthony

With the win, Hertford County improves to 4-1 overall and 2-0 in conference play, which sets-up a battle for the league’s top spot when the Bears visit unbeaten Northeastern (4-0; 2-0) this Friday night (Oct. 1) in Elizabeth City.

The Bears, who produced 376 total yards of offense, scored a pair of touchdowns in each the first and second quarters to roll to a 24-0 halftime lead.

Rodgers, who passed for 117 yards on a 9-of-14 night, tossed a 45-yard strike to senior receiver Bryant Williams on the game’s fourth play, staking the Bears to a quick 6-0 lead.

After an exchange of possessions, the Bears struck again with 4:44 left in the opening period where Cruz capped a short drive with his one-yard TD run.

That lead grew to 18-0 at the 9:59 mark of the second quarter where the Bears marched 79 yards in 10 plays capped by a six-yard TD run by Rodgers. That drive was kept alive by an 18-yard hook-up between Rodgers and Israel Powell on a fourth-and-five play from Pasquotank’s 26 yardline.

Just a few minutes later, Williams electrified the home crowd by returning a punt 66 yards to paydirt. However, the touchdown was nullified by an illegal block by the Bears on the return.

It didn’t matter, as Hertford County proceeded to march 73 yards in 12 plays capped by a leaping one-handed catch by Powell of a five-yard TD pass from Rodgers to account for the 24-0 halftime lead.

The Bears then put the game away in the third quarter where they scored three times to build a 42-0 lead.

Cruz ran with authority in the third period and scored twice on runs covering 15 and 13 yards. 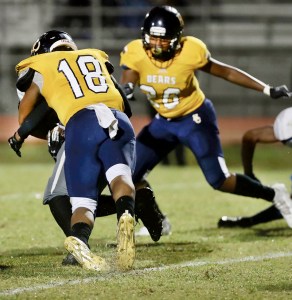 Hertford County linebacker Brian Eley (#18) makes one of his five tackles for loss, part of the reason why the Bears defense totally shutdown the Panthers in Friday’s conference game. Photo by William Anthony

Rodgers scored the third touchdown of the period where a key block from Jahaun Bond paved the way for a 15-yard scamper to paydirt.

The Bears defense limited Pasquotank to only one trip across midfield and two first downs (one by penalty).

White was sacked three times – one each by Whitted, Elijah Parker, and Devonte Cofield.

Meanwhile, senior linebacker Brian Eley and Speller combined to make 15 tackles. Nine of those resulted in a combined negative 27 yards.

Between the sacks and other tackles for loss, Pasquotank wound up with minus 62 rushing yards on 27 attempts. White did muster 25 passing yards, leaving the Panthers with a net -37 yards of total offense.