GATESVILLE – Gates County Commissioner Jonathan Jones will step down from his elected office on Oct. 11 and has submitted a digital version of his letter of resignation in advance of that date.

Jones – who announced in late July of his intentions to resign the seat to which he was elected in 2018 – confirmed the Oct. 11 date during a Facebook Live session immediately following the regularly scheduled commissioners’ meeting on Sept. 15. 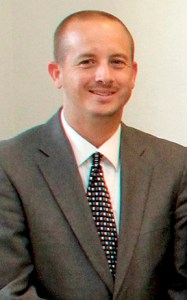 Jones referenced an email sent Monday afternoon (Sept. 20) to his fellow commissioners as well as the county manager as his official notice of resignation.

“Although it has been an honor to serve the citizens of Gates County these past few years, I begrudgingly admit that I have at times done so with less than honorable individuals and circumstances,” Jones noted in the email.

“Although many county employees and citizens wish for me to remain on the board, I will not be able to do so and give 100%, which is what all citizens deserve,” he continued. “However, upon further reflection, me at less than 100% is still better than some others that hold positions of authority are at full capacity. The county employees and citizens deserve an advocate – which I’ve tried to be, a voice of reason – which I’ve tried to be, and a person that held those in authority accountable – which I tried to be; while I at least have tried I only wished my colleagues would have shared my same sense of duty.

Jones wished good luck to the county employees and citizens of Gates County.

“Unfortunately I believe you’re going to need it,” he concluded.

In response to the email from Jones on Monday, Dr. Althea Riddick, Chair of the Gates County Commissioners, sent out an email on Tuesday morning.

“Until the County Attorney, County Manager, or Chair of the Board receives a signed letter of resignation with a date certain, there is no official resignation,” Riddick said in that email.

It was at the Sept. 15 meeting, which Jones attended along with his four fellow commissioners, where Riddick read a prepared statement. She addressed Jones’s absences from the past several meetings as well as not yet receiving his formal letter of resignation. The latter, she said, has delayed the board, “to respond or take any formal necessary action.”

Riddick’s remarks came near the end of last week’s meeting, during the portion of the agenda set aside for commissioner comments. She said her statement, “is meant to help clarify the citizens’ confusion and misinformation around the authority of the Chair and the Board of Commissioners in the present situation.”

“There is not a North Carolina General Statute that gives the Board the authority to sanction or remove a commissioner for nonfeasance of the oath of office or general unprofessional behavior, unless there is a charge of a misdemeanor,” Riddick read from her statement.

Riddick said based on Jones’s remarks made on his Facebook page back in July followed by two articles in the Gates County Index, she concluded that his decision to step down were based upon the fact that he wasn’t selected Board Chair in December of last year as well as due to health reasons and wanting to spend more time with his family.

Riddick further stated that after Jones was not elected as Board Chair, he relinquished all his committee assignments except for one that has not met in at least seven years.

As an example, Riddick noted that Commission Vice Chair

Jack Owens was assigned earlier this year to assist in resolving some issues with the county’s water department.

“So, Mr. Jones does not serve on any active committees,” Riddick added. “That does not preclude him or any commissioner from addressing citizens’ concerns, but it does cause unnecessary misinformation and disinformation when matters are submitted as a ‘gotcha’ moment.”

Riddick said she has no comment about Jones citing health and family reasons as to why he was resigning. However, she stated that Jones, “has been very active after the time of his initial announcements. He has attended board meetings at the DSS, county-wide events, sport events, fundraisers, etc., but has not attended the last two regular board meetings, and the special meeting where our US Congressman took the time to address the citizens and listen to the Board of Commissioners.”

She pointed out that the Hall Township (where Jones resides) has been without representation at official meetings for two months.

“A citizen (plural, she said) has asked about taxpayer dollars being paid to commissioners not actively serving,” Riddick stated. “Again, there is no official action that can be taken concerning the stipend commissioners receive for their service. Commissioners receive $726.53 per month, and the chair receives $865.57 per month before taxes. Now, some of us may donate the stipend, and that is our choice. But the funds are for actively serving, not sending emails every now and again.”

“He never officially resigned,” Riddick said, adding, “the Board of Commissioners is not just a group of friends, neighbors, community activists, church members, etc. It is the governing body for the county. And as such we should be held to a higher standard of behavior, of accountability, credibility, and integrity.”

Riddick said the board sought the legal opinion of their attorney, who responded with the following:

“…NCGS 153-76 requires of County Commissioners the efficient administration of county affairs. Concerning the issue of repeated absences from the county commissioners’ board meetings raises ethical and philosophical questions about what it means to fill the role of a board member. Presence at meetings is important for developing working relationships and for interacting with citizens and supporting staff when decisions need to be understood and addressed. Continued absences, whether excused or unexcused at a minimum, have a detrimental effect on due process and the business of the county and the constituents for which the elected board member represents.”

With that, Riddick turned to Jones and asked: “Commissioner Jones, do you still intend to resign at the end of September as you stated on Facebook and in the articles in the Gates County Index? If so, an official letter of resignation with a date certain must be submitted to Mr. Philip Godwin, county attorney, or Mr. Tim Wilson, county manager, or to Dr. Althea Riddick, chair of the board of commissioners.”

Riddick asked if there were comments from any of the other commissioners. Hearing none, Riddick asked for a motion to adjourn the meeting, which was approved without objection.

On Facebook Live following the meeting, Jones said he attempted, at the start of the meeting, to add a closed session to the agenda….stating he had some information to share with his board colleagues. Jones made a motion to add the closed session, but his motion died due to a lack of a second.

As for Riddick’s comments about his role as an elected leader, Jones said he had a statement to make during commissioner comments, but wasn’t called upon to make them.

In those comments, shared on Facebook, Jones apologized for missing the last two regular meetings of the board, saying that his daughters had events scheduled at the same time and he chose to attend those instead.

He shared that his health was improving following his bout with COVID-19 late last year.

Jones confirmed that he still plans to step down from his elected role as a county commissioner, adding that his last day will be Oct. 11. He said he chose that date in an effort to “preserve some emails and documentation for my purposes and citizens’ purposes.”

Jones added that he had received numerous comments from Gates County citizens who encouraged him to remain as a commissioner.

“In the past we’ve agreed to disagree, but now it seems [board members] are flocking to one person’s opinion,” Jones stated.

He offered an apology to the county’s local government employees for not being there “to do more for you. I appreciate what you do for the county and for the citizens. Until your voices at heard at the polls next year, nothing is going to matter.”

Jones also apologized for what he said was the “other four commissioners not even wanting to listen.”

He added that other than Commissioner Ray Freeman, none of the other board members had reached out to him personally since he announced in late July his intentions to resign.

“But I’ve heard from the citizens,” he stressed. “Every citizen that asked me what is going on, I’ve told them. I’m an open book….I’ve got nothing to hide; I tried to get some things done.”

In another Facebook Live session on Sunday evening (Sept. 19), Jones again referenced his board colleagues balking at his request to amend last Wednesday’s meeting agenda to add a closed session at the end.

“I’m sick and tired of some things, but obviously no one else cared,” he said. Those folks behind that table knew what was coming at the end of that meeting and they didn’t want to hear what I had to say. They sat there, behind that $14,000 table, while [Riddick’s] statement was read and they didn’t say a thing. That says something in itself.

“Ya’ll know I’ve always spoke up, even when I wasn’t in the majority,” Jones continued. “I’ve always explained why I voted the way I did. I never swayed my vote just to be with the majority of the board. We don’t need to be afraid to speak up. That’s why ya’ll elected me.”