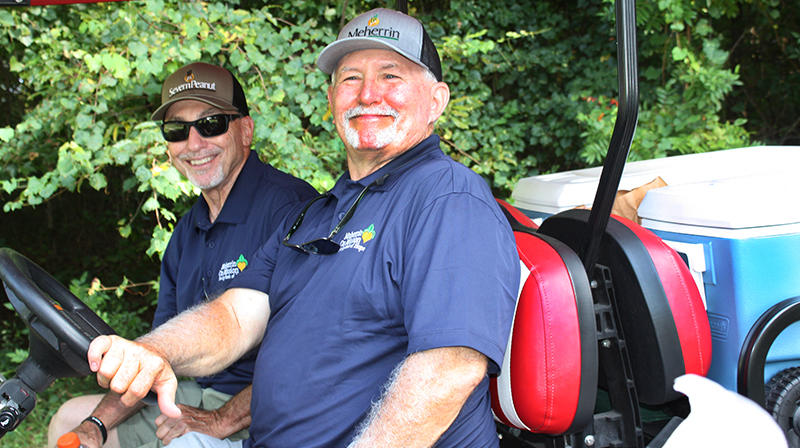 Dallas Barnes (left) and Don Rosie operate the beverage cart during the recent “Meherrin on Mission” Golf Tournament, which served as a fundraiser for the nonprofit entity that was founded to help those in need. Contributed Photo

SEVERN – A nonprofit developed by a local company is working to provide help to the rural communities they serve.

“Meherrin on Mission” is a 501c3 nonprofit of Meherrin Ag & Chemical, an agricultural company headquartered in Severn. They have locations spread throughout several states, and are also the parent company of Severn Peanut and Hampton Farms.

“It’s an initiative that came out of our Ministry Action Team here,” explained Director of Community Relations Kyle Patterson about the origins of the program.

Patterson said the group first got started in the aftermath of Hurricane Florence in 2018. Trenton, located near New Bern, got hit hard by the storm, including many employees and customers of the Meherrin Ag location there. 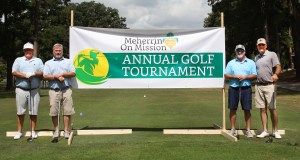 This foursome poses for a photo by the “Meherrin on Mission” Golf Tournament sign. They were among the 25 teams participating in the event that raised in excess of $100,000. Contributed Photo

“We had some employees that were affected by the flood and storm damage, and then we had customers that were flooded as well,” he said. “That was the first opportunity for us to really give back in this way.”

Patterson recalled that several employees from the Severn office traveled down there to help clean up, and the organization contributed financially to the rebuilding efforts as well.

“Of all the things our company has ever done, that one changed the culture of our company at a greater rate than anything we’ve ever done,” he continued. “People always want to give, but they don’t know how to give or aren’t able. This was an opportunity.”

Since then, they’ve only continued to expand their scope. Along with disaster relief projects, Meherrin on Mission offers scholarships to employees, children of employees, and Meherrin Ag customers. Patterson said they awarded 15 scholarships this year.

And the third focus of their work – other missions, such as supporting organizations that build churches – should kick off in the next month or two.

Recently, Meherrin on Mission hosted their first golf tournament in Smithfield to raise money to continue their efforts. With around 25 teams participating, Patterson reported that they raised over $100,000.

“It came off very well,” Patterson said, adding that, at least for the short-term, they plan to continue holding the golf tournament annually.

Patterson explained that many of the communities Meherrin Ag serves, including in the local Roanoke-Chowan area, are rural and can sometimes be overlooked when in need. So that’s one major reason why the company wants to continue to serve their communities.

“It was an awesome opportunity for us to give back,” said Patterson. “There’s a great need there and it’s a good feeling to be able to give back in that manner.”