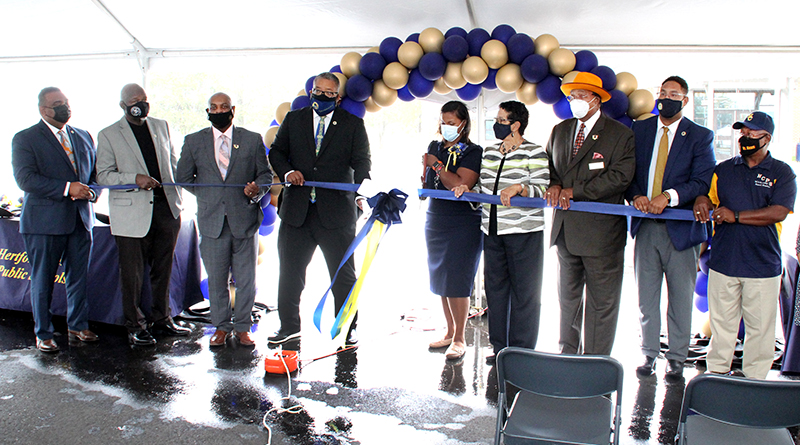 However it’s on the inside where future leaders at the local, regional, state and maybe even the federal levels are growing and learning thanks to a hi-tech educational environment that is drawing rave reviews. 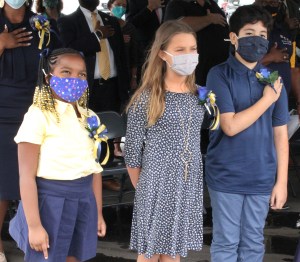 The new school opened for staff on Aug. 16. The students arrived Aug. 23 to start the 2021-22 academic year. Still to come is a 350-seat, state-of-the-art auditorium, scheduled to open later this year. The auditorium can also be used for community events.

With the exception of the principal and three pupils, all students and staff of Ahoskie Elementary School joined the Sept. 17 ceremony via Zoom while they were inside the facility.

“Today is a day of victory for us,” stated Dr. William T. Wright Jr., HCPS Superintendent. “There’s no better investment we can make, in my opinion, than an investment in our future. Today is about the future of our county, our community, the state and the nation. We have made a commitment to provide a better educational environment for our students.”

Wright shared a story of when he first arrived in Hertford County six years ago. He remembered being approached in a local grocery store by a woman who asked if he was going to be the person who finally gets the ball rolling on building a new Ahoskie Elementary School.

“My promise to her was, yes mam, I am,” Wright recalled. “I didn’t know how I was going to get it done at that time; didn’t know the history behind this effort….but here we are six years later and I’m so thankful for all those who had a hand in this project that allowed me to keep the promise I made.”

Wright called Ahoskie Elementary School, “a game-changing venue for many years to come.”

He paid tribute to the members of a stakeholders committee, a community-based group appointed to get the process started.

“Their work was key at the outset of this project,” Wright said.

The Superintendent also thanked the efforts of the project’s general contractor – A.R. Chesson & Son – and the architect – SFL+A.

“We’re so thankful to all of you for this amazing work,” Wright said. “Everyone has been onboard with the core of this project, making things better for the children of this county.

“This is not just an ordinary school,” Wright continued. “It’s not something we had built solely for the purpose of getting out of an old building. From the technology, to the seating, everything about this new school speaks that we care about and have made an investment in the future. I’m proud to stand with our Board of Education knowing that we have done work that will be important for many generations to come.”

“We here at the new Ahoskie Elementary School are challenging, motivating, and engaging our young scholars to become productive citizens of tomorrow. The best is yet to come,” Riddick remarked. 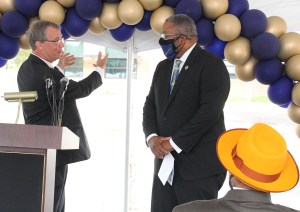 Shelia Porter, Chair of the county’s Board of Education, said the foundation for last week’s grand opening celebration began years ago by former school board members, school leaders, county commissioners, and the community.

“It’s their hard work, dedication, and forward thinking that sent us along this path,” Porter said. “All of us should take a moment and reflect on what we can accomplish when we work closely together and focus entirely on what’s best for our children. Thanks for bringing our vision to light with such excellent teamwork.

“We’ve heard this so many times – it takes a village to raise a child – our community is here today and standing up for the children of Hertford County,” Porter concluded.

Ronald Gatling, Chair of the Hertford County Board of Commissioners, said he remembered his time 50 years ago when he was a student at the old Ahoskie Elementary School.

“Today I proudly stand here at the birth of the new Ahoskie Elementary School,” Gatling stated. “When I ran for office in 2016, I told the public all over this county that we were going to build this school,” Gatling recalled. “It’s unprecedented for a board of commissioners to say to a board of education that you need to build a school. The school board said let’s do it.”

“There was unwavering support from all sides for this new school,” Gatling stressed. “Thirty years from now, when the students that have passed through these doors are grown and are educators, doctors, teachers, and laborers, it will be because of the people sitting here today.”

Gatling shared stories of the efforts put forth by the commissioners and the school board members to meet with state officials – even driving to Raleigh to do so – to secure $15 million from the Needs-Based Public School Capital Fund.

“No matter who gets the credit for that, it’s all for the students…they are the beneficiaries of all that work,” Gatling closed.

One of the state elected leaders involved in the process was Howard Hunter III of the North Carolina House of Representatives.

“As Chair [Shelia] Porter said in her remarks, working together works. Plus you got a great deal….a 21 million dollar school for six million dollars,” Hunter stressed.

Ahoskie Mayor Weyling White, himself a former student at the old Ahoskie Elementary School, said he is now a parent of a child enrolled in Hertford County Public Schools.

“It’s a pleasure to see the work that our local leaders are doing for the children of this county,” White remarked. “Thanks to all of you for your hard work. I’m excited about the future of our children and our community.”

Just prior to the ribbon-cutting ceremony, Dr. Wright presented ceremonial shovels that were to be handed out to local and state officials when the ground was to be formally broken to start the construction process in 2020. That ceremony was canceled due to the COVID-19 pandemic.

Last week’s ceremony also included remarks from A.R. Chesson, the general contractor for the new school, and from Tom Hughes of SFL+A, the project’s architectural firm.

Featuring 55,000 square feet of educational space, the new Ahoskie Elementary School replaces a facility that had served students since 1959. The school replacement project had been a topic of serious discussion since 2011.