From ‘Blue Out’ to Blow Out 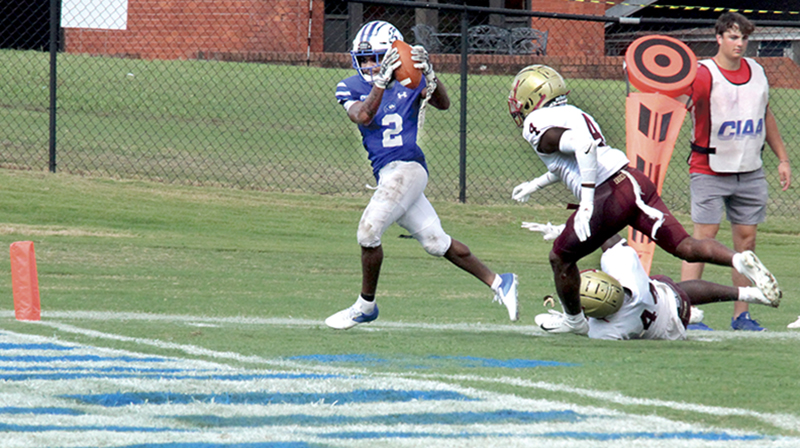 Laurence King tip-toes down the sideline en route to a third quarter touchdown in Saturday’s home football opener vs. Erskine College. Chowan scored four TDs in the third quarter, pulling away from a narrow 21-12 halftime lead to a 49-19 victory. King was the game’s leading receiver with nine catches for 162 yards. Staff Photo by Cal Bryant

MURFREESBORO – As part of a special “Blue Out” promotion to celebrate undefeated Chowan University’s return to home football games, fans were encouraged to pack Garrison Stadium wearing the royal color on Saturday.

The indigo arrival, coupled with the enthusiasm of the fan base, no doubt helped inspire the Hawks to a 49-19 win over Erskine, their third of the season. The 3-0 start is the program’s best since 1999.

Leading by just nine at halftime (21-12), the Hawks struck for 28 points in the third quarter to put the game away, upping the margin to 49-12 and thus grounded the Flying Fleet. 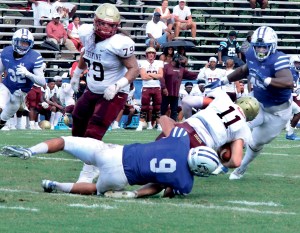 Quarterback Bryce Witt struck for 402 yards through the air on 22-for-33 passing with seven touchdown tosses. Witt’s seven-score aerial assault tied his own single-game record set against Alderson-Broaddus in 2019.

“We had some struggles at one point, but then we came out in the second half and put up (all those points) in the third quarter,” said Witt after the contest. “Whether we won by one or 100, what matters is we came out here and played football like we know we can and now we’re 3-0.”

On the receiving end, Chowan was led by Laurence King (nine catches, 162 yards, one touchdown) and Imeek Watkins (4 TD’s). And the Hawks weren’t too shabby on the ground either: out-gaining the Fleet 142 to 21, led by Tyrek McNeil with 86 yards on a dozen carries en route to a total of 544 yards on the day.

“We just wanted to give the fans a good show,” said Watkins in a post-game interview. “We’ve been on the road battling and this is about the best team I’ve been on so far.”

The Chowan defense forced all three of the game’s turnovers: two interceptions and a fumble, but shone best in harassing Fleet quarterback Craig Pender, sacking him seven times, all in the first half. Defensive lineman Rafiq Abdul-Wahid led the charge with two-and-a-half sacks.

“We worked on it all week,” said Abdul-Wahid. “We knew pretty much they couldn’t block us up front. It wasn’t a question of how may times we got in the backfield as much as executing once we got there.”

“We gotta stay active,” chimed in fellow lineman Gilberto Ortiz, who finished with two sacks. “We gotta keep it going because it’s a different culture around here now. We feed off each other’s energy so it feels like we never leave home.”

Chowan set up their first score with a turnover on an interception. Lawuan Axel’s ‘pick’ set up the Hawks near midfield and Witt’s four-yard toss to Watkins four plays later were the first points of the game, 7-0, after Jude McAtamney’s PAT kick.

Two possessions later, aided by penalties, Erskine broke through in the scoring, but missed the PAT and trailed by a single point, 7-6. 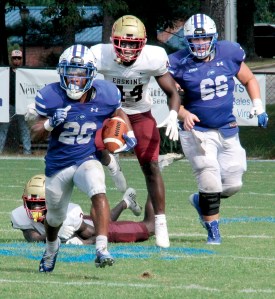 Chowan University sophomore running back Tyrek McNeil (#26) takes off on a 40-yard scamper, part of his 83-yard effort on the ground that helped the Hawks defeat Erskine, 49-19, on Saturday afternoon. Staff Photo by Cal Bryant

Early in the second quarter Witt found Malik Tobias for Chowan’s second touchdown and a 14-6 lead. On the succeeding defensive series, Ortiz picked up a sack on second down, later forcing a punt. Following a Chowan punt, Erskine moved near the red zone before Abdul-Wahid posted a sack on third down bringing up a field goal attempt, but Erskine missed from 39 yards out keeping it at 14-6.

The next time they had the ball, the Fleet scored to pull within two at 14-12. But Chowan quickly answered on Witt to Watkins, part-two, and a 21-12 lead. The Hawks had a chance to pad that advantage with time running out in the half, but McAtamney’s 45 yard field goal attempt was wide right, leaving that nine-point advantage at the mid-break.

Whatever second-year coach Mark Hall said at halftime must have worked because Chowan’s offense exploded in the third quarter. Watkins got things started when he hauled in his third scoring strike of the game on the Hawks’ eight-play opening drive and upped the lead to 28-12.

On Chowan’s next possession, the Witt-Watkins combo went one beyond the hat-trick with a fourth hook-up and a 35-12 Hawks’ advantage. Two and a half minutes later, Laurence King hauled in his first scoring catch of the game and the point-after kick staked Chowan to a 42-12 lead. With little more than a minute and a half left in the quarter, Witt closed out his day by hitting his fourth different scoring receiver in Sam Dunn and a 49-12 lead for the Blue-and-White.

Erskine scored one final time before registering the game’s final turnover on their next possession, a fumble recovered by Chowan. That led to the Hawks just running out the clock, but not before freshman Cade Cradlebaugh completed his first pass as a collegiate in relief of Witt, who sat out the final 15 minutes of the game.

“Having not played in almost two years we wanted to just get after it, and it was great to play in front of our home fans,” said head coach Hall afterward. “We expected to be where we are at this point. All off-season we talked about being where we are at this point, so we’re happy with it, but we’ve still got a lot, like discipline issues, to clean up and keep working on.”

Chowan has a chance to eclipse the early win total later this week and claim a fourth ‘W’ when they hit the road to begin CIAA league play with a 1 p.m. game in Raleigh on Sept. 25 versus St. Augustine’s.